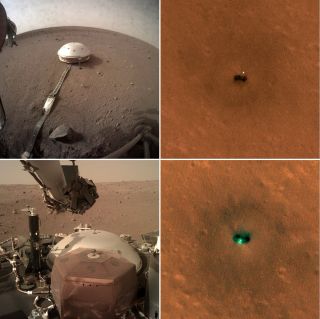 On the left are photographs taken by the Mars InSight lander: of its completely deployed seismometer at the top and of its seismometer instrument before deployment at the bottom. On the right are images captured by the Mars Reconnaissance Orbiter showing the InSight lander on the Martian surface.
(Image: © NASA)

NASA's InSight lander has been busy on Mars preparing to begin scientific observations, and the mission passed another milestone this weekend, when the spacecraft began preparing to deploy its final instrument.

That instrument is the heat probe, which, if all goes well, will drill itself about 16 feet (5 meters) into Mars over the course of about two months. The deployment process, like that for the lander's seismometer, relies on the grapple-like claw at the end of InSight's robotic arm. As of yesterday (Feb. 10), the claw is grasping the heat probe in preparation for deployment.

As the probe burrows into the Martian soil, it will take measurements of how heat flows throughout the planet. That should help scientists understand the properties of Martian regolith.

The heat probe will follow its predecessor, the seismometer instrument that will track seismic waves through the interior Mars to try to map its structure. Scientists believe the planet is home to so-called marsquakes, which would create such waves, but the seismometer will also register echoes from meteorite impacts and from the heat probe itself during its drilling process.

Scientists have images of the seismometer not only taken by the lander itself, but also as spotted by the Mars Reconnaissance Orbiter, which has been circling the planet since March 2006. One of the instruments on board is a camera called HiRISE, which is able to capture detailed images of the Red Planet's surface.

Those images are so detailed that the polygonal solar panels of the lander itself, as well as the white spot of the seismometer's white protective cover, are visible.