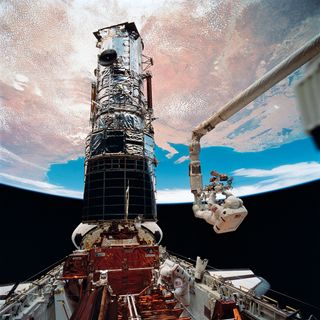 The Hubble Space Telescope was visited by astronauts during five space shuttle missions between 1993 and 2009. Here, two spacewalking astronauts work on Hubble during the first servicing mission, when the telescope’s mirror was fixed and a new camera was installed.
(Image: © NASA)

When it comes to telescopes, size matters.

In order to keep learning new things about the universe, astronomers are constantly building bigger and better observatories to gaze at the cosmos both from Earth and from orbit. Engineers have already started developing the technology needed to build the next generation of cutting-edge space telescopes, but there's just one problem: These observatories may be too big to launch into space.

Both in terms of size and weight, the telescopes astronomers and engineers are already planning for the future are quickly outgrowing the capabilities of the rockets that exist today. That's because a telescope's capabilities depend largely on its aperture, or the diameter of its main mirror. New "megarockets" like NASA's Space Launch System may be big enough for the next-generation space telescopes that NASA aims to launch in the 2030s, but if subsequent missions have to squeeze into the same-size rocket fairing, those missions may have to sacrifice some scientific potential. [Giant Space Telescopes of the Future (Infographic)]

Rather than constrain a telescope's design to fit inside the payload fairing of the biggest available rocket — thereby placing a limit on the amount of science its instruments can return — NASA scientists are working to find new ways to get those hefty space telescopes into orbit: by launching them piece by piece and assembling them in space, either robotically or with the help of astronauts.

"Large telescopes give you better angular resolution and better spectral resolution, so the future should be bringing larger telescopes," Nick Siegler, the chief technologist for NASA's Exoplanet Exploration Program, said during a presentation at the 233rd meeting of the American Astronomical Society in Seattle in January. That higher resolution will allow telescopes to see more of the universe, looking deeper and seeing clearer than ever before. It will also be particularly useful for finding and characterizing planets around other stars.

"Of course, 'large' is relative, but the challenge moving forward is the same," Siegler said. "You have large structures that you're trying to fold into smaller structures, and the amount of work that goes into that is really quite tremendous." For example, NASA's James Webb Space Telescope (JWST) — currently scheduled to launch on an Ariane 5 heavy-lift rocket in 2021 — will fold up to fit inside the rocket's payload fairing. When that telescope is ready to deploy, more than 200 moving parts must carefully unfold before the instrument can get to work observing the sky.

JWST will be the largest space telescope ever launched, with its 6.5-meter (21.3 feet) mirror. The Ariane 5 that will launch JWST is a heavy-lift rocket that is typically used to launch satellites into Earth's orbit. However, those rockets have also been used to launch interplanetary missions like the European Space Agency's BepiColombo mission to Mercury that launched last October. Although the JWST has not yet launched, NASA scientists are already working on proposals for its successor. (Spoiler alert: They're even bigger than JWST!)

NASA engineers working on the blueprints for proposed space observatories like the Large UV Optical Infrared Surveyor (LUVOIR) and the Origins Space Telescope (OST) have already had to cope with the limitations of today's rockets. For each of those two telescopes, the engineers came up with two different design options: a 15-m (50 feet) version that can launch on NASA's upcoming Space Launch System (SLS) and an 8-m (26 feet) version that can launch on today's smaller and less powerful heavy-lift rockets. Those smaller versions are NASA's backup plans in case the SLS won't be ready in time; the megarocket has already faced extensive delays and cost overruns.

Instead of waiting for someone to build a rocket big enough to support the kinds of space telescopes that scientists hope to launch in the future, a team of NASA researchers is studying the possibilities of in-space assembly. That process would not only remove the obstacles associated with rocket size, but could also reduce the cost of developing and launching new space telescopes, said a description of the "in-Space Assembled Telescope" (iSAT) study.

Figuring out how to build a telescope in space is only the beginning. To make in-space telescope assembly a reality, NASA will need to prove that the process is not only possible, but also cost-efficient and not too risky. Those factors largely depend on whether the assembly will be done by astronauts, robots or some combination of the two, members of the iSAT team explained at the AAS meeting.

Sending astronauts to work on a space telescope is not a new concept; NASA's iconic Hubble Space Telescope, which launched in 1990, was serviced by astronauts five times between 1993 and 2009. Although the astronauts did not originally build Hubble, they did install some new equipment and conduct some major repairs on the observatory. No other space telescopes have been visited by astronauts since the last Hubble servicing mission.

While the space shuttles that flew on the Hubble servicing missions have been retired since 2011, NASA could send astronauts from the Lunar Orbital Platform-Gateway. That proposed lunar space station would serve as a stepping stone for future crewed missions to Mars.

But some researchers, like Siegler, think that robots would be better for building things in space. "Astronauts are expensive," he said. "We think we can do this entirely robotically." A robotic system for building in-space telescope assembly would work a lot like the robotic arms at the International Space Station, he said.

This summer, the iSAT team aims to publish the latest findings of its study on different options for in-space assembly.