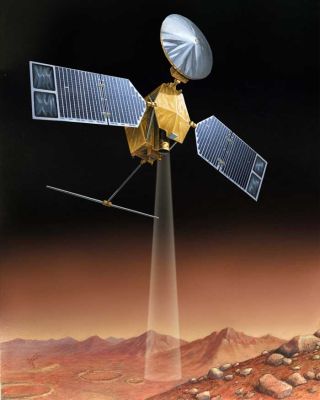 An illustration of the Mars Reconnaissance Orbiter based on the final design.

DENVER, Colo. -- The next spacecraft destined for Mars is rapidly coming together here on Earth -- an interplanetary probe that carries the most powerful instruments ever sent to the red planet.

NASA's Mars Reconnaissance Orbiter, or MRO for short, is being readied for sendoff next year. The huge spacecraft carries a suite of instruments, including a camera system able to provide ultra-close-up images of Mars' surface, and a sounder to probe for water that might linger subsurface on the planet.

MRO is a crucial link to a wave of upcoming robotic landers slated to dot Mars in coming years.

But more so, MRO stamps the passport for human visitation rights, road mapping Mars to help resolve where expeditionary crews can best land, sustain their presence, and continue the quest to unravel the past and present state of affairs on Mars.

Workers here at Lockheed Martin Space Systems, Denver, have been building the orbiter for well over a year and have reached the final assembly stage.

With an unyielding launch window of August 2005, the pace of integrating spacecraft hardware, checking out software, installing science instruments, and readying the spacecraft for "shake and bake" launch and space cruise simulations is at full-speed.

The MRO project is managed for the NASA Science Mission Directorate in Washington, D.C. by the Jet Propulsion Laboratory (JPL) in Pasadena, California. Lockheed Martin Space Systems, Denver, is prime contractor for the project.

"MRO takes us another step forward in Mars exploration," said Kevin McNeill, Lockheed Martin's program manager for the orbiter. "It is by far the biggest thing that we will have put into orbit around Mars," he told SPACE.com.

Not too far away from where MRO is being geared up, so too is its launch vehicle - an Atlas 5, also built by Lockheed Martin. Nothing like an "all in the family" Mars mission for the aerospace firm. This will be the first interplanetary mission hitched to an Atlas since 1973.

Target date for MRO's shipment from Lockheed Martin to Cape Canaveral, Florida is early May, with the launch window to shoot for Mars opening on August 10th and extending through August 30th of next year.

So no wonder the tempo of work is quickening.

"On any given day there are a lot of different things happening here on the spacecraft," McNeill said.

Assembly and testing of MRO has not been without problems. Like many spacecraft projects it becomes somewhat a balancing act, McNeill said, of what hardware appears on time versus tardy shipments of, say, science instruments, or glitches in pulling together flight ready software.

There is the on-going saga of "workarounds", juggling schedules, parts problems, and keeping options open, McNeill noted. "One thing we've not fought as much are issues like mass and power. You don't want to be sitting there a year out from launch trying to find 50 kilograms to take out. Fortunately, we haven't had to do that."

All this is business as usual, McNeill remarked. Contrasted to other spacecraft building, in some ways things have gone much smoother for the Mars Reconnaissance Orbiter, he said.

One MRO item that made the spacecraft builders breathe a little harder was how complex the new command and data handling system for the Mars orbiter turned out to be. Lockheed Martin invested a considerable amount of company funds toward its development, McNeill added.

Testing: what it's all about

"Fundamentally, they are one-of-a-kind spacecraft. You make your plans. You do your best to execute your plans. And then you work around things. We're in the latter stage right now," explained Tim Gasparrini, a mechanical engineering and test manager for MRO within Lockheed Martin's Flight Systems.

Gasparrini said MRO's "open architecture" allows access to nearly all parts of spacecraft hardware, making it easier to work in and around the craft. "The assembly you have to do...but the testing is what it's really all about."

The philosophy is that "no single failure on the spacecraft can take out the mission,' Gasparrini told SPACE.com.

One MRO challenge has been the requirement for rotating the camera system plus or minus 30 degrees to the side. Then there's need to have the spacecraft's gigantic solar arrays follow the Sun while the craft's high gain antenna keeps Earth in its crosshairs - adding up to a unique dance of hardware while MRO orbits the red planet.

Shortly after launch next year, MRO will deploy both its large high gain antenna and set of solar arrays. "We're in that configuration all the way through cruise," McNeill said. There are no deployments at the planet, he continued, except for the Italian Space Agency's shallow radar sounding instrument. It will probe below the martian landscape to search for underground layers of ice, rock and, perhaps, melted water.

After liftoff, the spacecraft will cruise toward Mars, taking about seven months to arrive at the red planet.

"So we'll be flying in the configuration similar to what we're in at Mars. You get everything deployed immediately. You don't have to worry about the long-term storage effects on mechanisms that need to later deploy. Also it gives you the feel of flying the vehicle," Gasparrini explained.

In order to be captured into orbit around Mars, the spacecraft performs an insertion burn using its main engines. That Mars Orbit Insertion burn takes about 25 minutes, gulping most of the fuel carried onboard.

The capture orbit achieved will be highly elliptical. In order to round out the elongated orbit, MRO is to use atmospheric friction in a process called aerobraking.

MRO flies backwards so air flow during aerobraking hits the back end of the spacecraft, the back of the solar arrays, and the back of the high gain antenna - with all elements able to withstand temperature increases due to aerobraking, Gasparrini said.

Dipping in and out of the thin martian atmosphere will last for about six months, eventually placing the spacecraft into an orbit for science operations.

On orbit at Mars, MRO's data rate link to Earth is astounding: Three times faster than a high-speed residential telephone line. Ten to twenty times more data will be relayed from MRO than previous Mars missions - more data than all prior planetary missions combined.

"We are like 15 DSLs (digital subscriber lines). So we're talking about an incredible transmission rate of information coming down," McNeill pointed out.

The orbiter will also establish a crucial service for future spacecraft, becoming the first installment of an "interplanetary Internet." In addition, the mission will also test an experimental optical navigation camera that will serve as a high-precision interplanetary lighthouse to guide incoming spacecraft as they near Mars.

The cameras onboard will pinpoint Mars terrain in zoom-lens fashion, as well as produce wide-swath, high-resolution pictures, and even use a fish-eye lens to track changes in martian weather and variations in the planet's atmospheric ozone.

MRO can image objects on Mars as small as a dinner plate. Given that ability, unprecedented views of the martian real estate are expected, including obstacles that could ruin the day of an incoming lander or impede the progress of a future rover.

From the standpoint of exploring Mars like never before, MRO is a must have spacecraft. It is an observational bridge to help lay to rest perplexing questions about the red planet, such as whether or not life was once -- or is now -- alive and well there.

MRO's primary and relay mission requirement is to operate for 5.4 years. But it has the built-in chutzpa to keep on keeping on for a decade. Cost of the spacecraft, its booster, mission operations, and performing science for 10 years is in the $700 million range.

With so much riding on MRO, failure of the spacecraft is something nobody wants to consider, McNeill concluded. "Failure can happen...but failure really isn't an option when you consider the rest of the planned exploration of Mars in the next decade," he said.