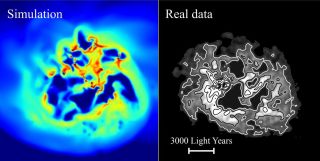 In a simulation, dark matter flowed away from the center of a galaxy as new stars formed. Real data about that galaxy, on the right, closely matches the simulation.
(Image: © J. Read et al.)

Dark matter detectives barely know anything about dark matter, but now they know this: It behaves differently on the fringes of old galaxies than in new ones.

A new paper, published Jan. 3 in the journal Monthly Notices of the Royal Astronomical Society, helps to narrow it down, though.

Most of the dark matter that scientists are aware of exists in "halos," or clouds within galaxies. But there's a problem: Those cores don't behave the way they should, according to computer simulations.

The popular explanation for the cusp-core problem, called the "Self Interacting Dark Matter" (SIDM) model, suggests that not only does dark matter exist entirely outside the physics we're able to directly detect and understand, but it also acts on itself using unknown forces. If dark matter's interactions with itself differ from its interactions with ordinary matter, that could explain how it's managed to travel from the centers of galaxies out toward their edges.

But this explanation might be overcomplicating things, the new study suggests.

This new paper, though, suggests that dark matter heating is the correct explanation.

The new findings suggest that dark matter heating is real and plays a significant role in how dark matter behaves, the researchers wrote. Galaxies that long ago stopped forming stars also had less energy to shove dark matter out of the galactic center. In those cases, dark matter behaved in the way simple models predict it should. More-active star-forming galaxies had more heating, and that made the dark matter there deviate from the models.

If this finding is correct, it narrows down the possibilities of what dark matter could be, though not dramatically: It just has to be something that would be blown out of the center of a galaxy with lots of new stars. And this result might mean it's unnecessary to propose all sorts of bizarre dark matter properties to explain how the substance behaves.

Still, nothing is yet certain. The researchers acknowledged in their paper that they relied on methods for simulating dark matter that have come under some criticism. There could be other galaxies out there with properties somewhere between the cusp and core models, which would complicate the new findings.

For now though, dark matter detectives can tack another piece of evidence to their bulletin boards covered in red string.