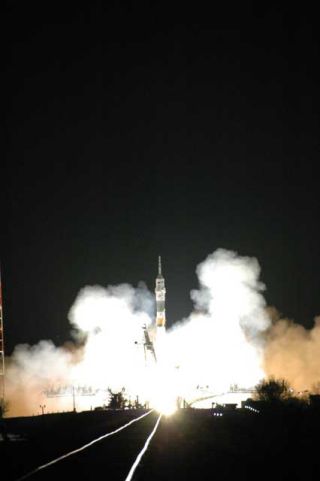 MOSCOW -- Russia's Federal Space Agency chief Anatoly Perminov said Friday that a prominent Russian businessman-turned-politician is training to fly to space as a tourist in 2009 and underscored the need to cut his country's dependency on the Baikonur Cosmodrome in Kazakhstan for manned space exploration.

"If we create a new manned spaceship,which our program until the year 2015 provides for, then we will need a new rocketand that rocket will require a new launch pad," Perminov told reporters in a pressconference here. We have not decided whether to build that pad at Baikonur or in Russia."

While Perminov didn't name the new spaceship, the Russian space agency has envisioned the Rocket Space Corporation Energia's Klipperspacecraft for use as a replacement for the Soyuz-TMA capsules and interplanetary voyages.

Should Russia decide to launch the new shipfrom its territory, it would have to build an entire new cosmodrome -- or spaceport -- from scratch, Perminov said. None of Russia's own cosmodromes, including Plesetsk in northernRussia, or the little-used Svobodny and Kapustin Yar pads located in the fareast and south respectively, meet requirements for the new ship, he added.

Perminov didn't elaborate on what theserequirements are, but it is known that all of Russia's existing launch pad areinferior to Baikonur when it comes to minimizing amount of fuel needed tolaunch ships to orbits where space stations operate. Perminov vowed that Russiawill continue to lease Baikonur, from which it carries out the bulk of itslaunches, regardless of whether it builds a new cosmodrome or not.

Kazakhstan agreed in 2004 to extend Russia'slease on the BaikonurCosmodrome until 2050. Then Russian president Boris Yeltsin and his Kazakh counterpartNursultan Nazarbayev signed an agreement in 1994, in accordance to which,Russia was to pay the annual sum of $115 million for renting Baikonur for 20years. "These are delirious ideas," Perminov said when asked ifRussia could leave Baikonur.

Perminov also said his agency may launch tospace the first ever Russian space touristeven before the new manned spaceship becomes operational. The official said one"serious" candidate is already undergoing medical tests to determinewhether he is fit to fly in 2009, but declined to name him.

"He has personally asked me not to name him. All I cansay so far is that he is a serious, respect person who is a businessman andpolitician," Perminov said.?

He would only add that the candidate is a young man. Aformer Federal Space Agency official familiar with the issue said the candidateis "most probably" a member of State Duma, lower chamber of thefederal parliament.

The former official - who was involved in negotiations withprevious space tourists, said in an Aug. 31 interview that the candidate hasneither paid any down payment nor completed medical tests. "Therefore, hecannot be for now considered to be a serious candidate," said the formerofficial, who asked not to be named.??

Only two Russians have in the past offered to pay money tofly to space as tourists -- head of the construction company Mirax Group SergeiPolonsky and then-mayor of Volgograd Yevgeny Ishchenko -- but neither agreed topay the full price of $20 million or more, the official said. Ishchenko wasforced to step down from his post amid accusations of corruption and he was subsequentlyconvicted of "illegal entrepreneurship" earlier this year.

To date, Russia's Federal Space Agency has launched fivespace tourists to the International Space Station (ISS) aboard Soyuz rocketsand spacecraft under agreements brokered by the U.S. spacetourism firm Space Adventures. Four were U.S. citizens and one was fromSouth Africa.

Prices for the orbital trips increased from $20 million-to-$25million to noless than $30 million earlier this year.

Perminov also said he has not had discussions with presidentVladimir Putin, whose term expires next year, on whether he may want to fly tospace. "I think the president has places to fly to and things to do,"Perminov said when commenting on wishes to see Putin aboard the ISS recentlyexpressed by commander of this station's current crew Fyodor Yurchikhin.

Deputy head of the Federal Space Agency Aleksei Krasnov toldreporters earlier that a number of rich Russians have inquired aboutpossibility of flying to space as tourists, but he also did not name thoseinterested.

Calls to Sergei Kostenko, head of Space Adventures' Moscowoffice, were not returned Friday.

Perminov said Russia is considering whether to propose toits ISS partners to extend the lifespan of the international scientific outpostfrom its 2015 designed end date to 2020. By then, he said, Russia should beable to launch a next-generation space station while also preparing forinter-planetary manned missions.

When discussing longer-term manned space exploration,Perminov said his agency plans to send cosmonauts to the moon by 2025, and thenset up a manned outpost there in 2028-2032.

Interestingly, one of the reasons that Perminov sought theremoval of Energia's previous chief Nikolai Sevastyanov in July outlandish vowsto carry out interplanetary manned missions, such as flights to Mars, and otherunrealistic projects, according to some Federal Space Agency and Energiaofficials. During Friday's press conference, Perminov attacked one ofSevastyanov's ideas - the proposal to mine helium isotopes on the Moon, sayingit is "misleading" and cannot be implemented in the next 30 years.

He also said Russia will not try to launch men to Mars atleast until 2035.

In his comments on unmanned space exploration, Perminov saidhe expects the number of Russian operational satellites to total 102 or 103 bythe end of this year. He also said Russia is considering whether to cooperatewith Indonesia for launches of small satellites by rockets to be fired fromAn-124 planes rather than from ground.

He also said Russia is touting the idea of developing Earthobservation and telecommunications satellites jointly with a number of Arabcountries, noting that Russian rockets have already launched six Saudi Arabiansatellites.

Launches of foreign satellites and other commercial servicesare expected to generate $800 million in sales for the national space androcket industry in 2008, Perminov said.