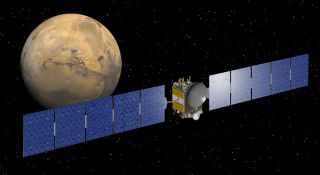 An artist's concept of the Dawn spacecraft near Mars.
(Image: © NASA/JPL)

NASA?s Dawnasteroid probe zoomed past the planet Mars late Tuesday to grab a speed boostaimed at flinging it on toward the largest space rocks in the solar system.

The ion-poweredspacecraft used the gravitational pull of Mars to slingshot around theplanet and hurtle outward toward its next stop, the asteroid Vesta. Themaneuver was expected to boost Dawn?s speed by more than 5,800 mph (9,330 kph)and set the asteroid probe on track to reach Vesta in August 2011.

"Withoutthe gravity assist, our mission would not have been affordable, even with theextraordinary capability of the ion propulsion system," said Marc Rayman,chief engineer for Dawn?s mission at NASA?s Jet Propulsion Laboratory inPasadena, Calif.

Dawn useselectricity generated by its solar arrays to charge a stream of xenon gasparticles and fires the resulting ions out a nozzle to slowly build up speed asit flies through space. Ion engines allow spacecraft to fly farther using lessfuel.

Tuesday?sMars flyby was expected to give Dawn a power boost equivalent to about 230pounds (104 kg) of xenon fuel. For comparison, Dawn?s current setup allows itto fire its engines for more than 24 hours while consuming about 9 ounces (0.26 kg) of fuel.

Dawn isexpected to fire its engine for about 50,000 hours - more than any otherspacecraft - by the end of its mission. Japan?s asteroid probe Hayabusa, whichreignited its xenon engine last month, has fired its ion drive for more than30,000 hours during its mission to the space rock Itokawa. Hayabusa is slowlyreturning to Earth to deliver a capsule that may contain samples of the Itokawaasteroid.

Launchedin 2007, Dawn is making its way toward Vesta and Ceres as part of a missionto better understand the formation of the solar system. The 3 billion-mile (4.9billion-km) trip is expected to take about eight years, with Vesta, the probe?sfirst target, still more than 2 1/2 years away.

Vesta is alarge oblong asteroid with a rocky composition. Ceres, meanwhile, is round andthe largest space rock in the asteroid belt. Aboutthe size of Texas, it actually qualifies as a small dwarf planet. Dawncarries instruments to hunt for water-bearing minerals, as well as measure theshape, surface topography, tectonic history, elemental and mineral compositionof both targets. It is also expected to measure their masses and gravityfields.

But first,Dawn has to actually reachVesta and Ceres, and to do that it needed the speed boost from Tuesday?sflyby.

Thespacecraft made its closest approach past Mars 7:28 p.m. EST (0028 Feb. 18GMT), when it zoomed within 341 miles (549 km) of the red planet. Missionscientists planned to use the rendezvous to test out Dawn?s cameras and otherinstruments as a sort of dress rehearsal for the Vesta encounter.

But thereis a downside to Dawn?s swing past Mars. Just as the probe nabbed a speed boostfrom the planet, the encounter slowed Mars by a tiny fraction, mission managerssaid.

"Theflyby will cause Mars to slow in its orbit enough that after one year, itsposition will be off by about the width of an atom. If you add that up, it willtake about 180 million years for Mars to be out of position by one inch (2.5cm),? Rayman said. ?We appreciate Mars making that sacrifice so Dawn can conductits exciting mission of discovery in the asteroid belt."