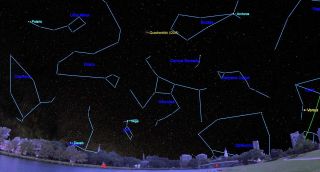 Named for a now defunct constellation near the north celestial pole called the Mural Quadrant, the annual Quadrantid meteor shower runs from December 30th to January 12th. This is one of the most reliable showers of the year, producing up to 100 meteors per hour at the peak. Many are bright fireballs owing to the shower's source, an asteroid designated 2003EH. The shower will peak on Thursday evening, while the Earth is traversing the thickest part of the debris field, but the best time for viewing will be before dawn on Friday morning, when the shower's radiant will be high in the northeastern sky. The moon will be out of the night sky at the shower's peak, greatly increasing the number of meteors one can see.
(Image: © Starry Night software)

Of the dozen or so annual meteor showers, only three produce rates possibly numbering over 100 per hour: August's Perseids, December's Geminids and — due to peak late this week — January's Quadrantid meteor shower.

Each year, the Earth briefly encounters that meteor shower in the first week of January. Quadrantid meteors appear to fan out from a spot on the sky midway between the Big Dipper's handle and the four stars marking the head of Draco, the dragon. And here's the story behind the meteors' unusual moniker: There was at one time a dim, shapeless star pattern known as Quadrans Muralis, the "wall quadrant." The pattern was pictured on many 18th- and 19th-century star atlases but is now defunct. Its stars have since been redistributed among the constellations of Boötes, Draco and Hercules.

The main challenge with the Quadrantids is catching them when they are active, because they are a very short-lived display. The Quadrantids characteristically spend only about 12 hours rising from quarter-strength to peak activity. The subsequent decline takes as little as 4 hours. Different hemispheres of the Earth often see the Quadrantids appear in dramatically different numbers. [Quadrantid Meteor Shower 2019: When, Where & How to See It]

According to the "Observer's Handbook" of the Royal Astronomical Society of Canada, the peak this year is predicted to come at around 0300 GMT on Friday, Jan. 4, which is good for Europe and areas east into Central Asia, where 60 to 120 meteors per hour are expected under ideal conditions.

But from North America, we'll face the "wrong way" when this shower reaches its peak. The time 0300 GMT corresponds to the evening of Thursday, Jan. 3, in North America, where incoming meteoroids will be mostly blocked from view by the planet Earth. Put another way, the meteor radiant will appear very low above the northern horizon, and consequently very few meteors will be visible.

However, in the past, outbursts of "Quads" have sometimes been seen several hours early or late, so it always pays to be on the lookout. The predicted peak corresponds to 10 p.m. EST and 7 p.m. PST.

While it's certainly true that meteors are few and far between when the meteor radiant is barely rising above the horizon, the meteors that do appear are usually spectacular "earthgrazers" that skim along the upper atmosphere and travel far across the sky. Just seeing one of these can make your night worthwhile. So, keep an eye out Thursday evening. Any Quadrantid earthgrazers will fly from out of the north-northwest part of the sky at nightfall: from almost due north around 8 or 9 p.m. and from the north-northeast from 10 p.m. to midnight in your local time zone.

Not until 1 a.m. will the radiant climb well up into the northeast; it's highest before dawn. The meteors that appear after the peak tend to be brighter than the early ones, indicating that the larger particles are on the outer side of the meteoroid stream. These meteors have been described as medium speed and reasonably bright and usually tinted blue. But only a few — maybe 5 to 10 percent — leave fine, long-spreading and persistent silver trains.

And a final note (or is it a reminder?) — it's January, the coldest month of the year. So, if you plan to hunt for some Quads, remember to bundle warmly!

Editor's note: If you snap an amazing photo of the 2019 Quadrantid meteor shower that you'd like to share with Space.com and our news partners for a possible story or image gallery, send comments and images in to: spacephotos@space.com.

Joe Rao serves as an instructor and guest lecturer at New York's Hayden Planetarium. He writes about astronomy for Natural History magazine, the Farmers' Almanac and other publications, and he is also an on-camera meteorologist for Verizon FiOS1 News in New York's lower Hudson Valley. Follow us on Twitter @Spacedotcom and on Facebook. Original article on Space.com.