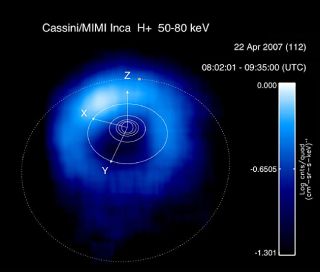 A Cassini image showing the energetic emission from Saturn's ring current. Part of the lopsided ring rotates with the planet approximately every 10 hours and 47 minutes.
(Image: © NASA)

Aninvisible donut of trapped, hot particles surrounding Saturn is all bent out ofshape--a finding that astronomers can't yet explain.

"It'scurious that Saturn's ring current isn't symmetric," said Don Mitchell, anastrophysicist at Johns Hopkins University who helped examine the images beamedback to Earth. "We think the solar wind is squishing the sunward side ofthe ring current, kind of like a wind sock."

Planetswith magnetic fields can trap hot particles within their clutches to form giantelectrified clouds?the ring currents?that are invisible to the naked eye.

Earth'sring current is made of hydrogen and appears duringsolar flares. Saturn's is made largely of oxygen and is always present. Thesaturnian moon Enceladus is responsible for the electric halo, as itconsistently spewswater vapor from its depths to feed the ring current with oxygen andhydrogen ions.

"Theheavier oxygen is like a rock on a string, stretching the magnetic field ofSaturn," Mitchell said.

Moremysterious to Mitchell and his colleagues, however, is a "clump" ofelectrified particles within the ring that rotates insync with the planet roughly every 10 hours and 47 minutes.

Cassini'simages show the bright clump orbits Saturn between 300,000 and 634,000 miles(485,000 and 1,000,000 kilometers) away from the planet's surface, butastronomers have not yet figured out what creates it nor why it moves so quickly.

"Saturnis a big fast rotator. The clump seems loosely hooked to the planet, yetrotates with it," Mitchell said. "It may be connected with Saturn'sring current, but we just don't know. This is something we're working very hardto figure out."

StamatiosKrimigis, also an astrophsycist at Johns Hopkins who examined the images, ispresenting them Thursday at the European Planetary Science Congress in Potsdam, Germany.