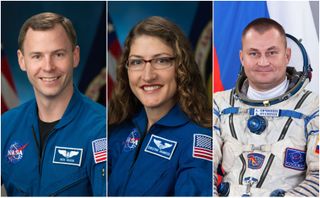 NASA astronauts Nick Hague and Christina Hammock Koch, and Russian cosmonaut Alexey Ovchinin are set to launch toward the International Space Station on Feb. 28, 2019, as members of Expeditions 59 and 60.
(Image: © NASA)

NASA astronaut Nick Hague is set for a second chance at his first trip to orbit. His first launch was foiled by a dramatic launch abort in October, but he is now assigned to lift off again Feb. 28, 2019, from the Baikonur Cosmodrome in Kazakhstan.

Hague will ride with cosmonaut Alexey Ovchinin, who was also on the aborted launch of a Russian Soyuz rocket, and NASA newcomer Christina Hammock Koch, NASA officials said in a statement today (Dec. 3). Like Hague, Koch is a spaceflight rookie; Ovchinin has flown to the International Space Station one previous time.

Russian officials determined that the cause of the abort, which sent Hague and Ovchinin shooting away from the rocket and parachuting back to Earth in their Soyuz capsule on Oct. 11, was a deformed contact sensor on the nozzle cover for one of the rocket's four strap-on boosters. This caused the booster to detach incorrectly and hit another part of the rocket. (During a briefing to discuss what happened, Russian officials released dramatic footage of that moment during the launch.) [In Photos: Space Station Crew's Harrowing Abort Landing After Soyuz Launch Failure]

Once Hague, Ovchinin and Koch arrive, they will contribute to the station's science experiments — and they're set to be on board during the first test flights of NASA's commercial crew program, NASA officials said in the statement. That program is NASA's effort to ensure that commercial vehicles from SpaceX and Boeing are prepared to carry astronauts to the space station.