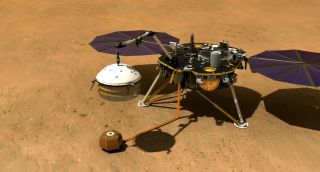 In this artist's illustration, NASA’s InSight Mars lander uses its robotic arm to cover the already-deployed seismometer instrument with a wind and thermal shield. InSight landed on the Red Planet on Nov. 26, 2018.
(Image: © Lockheed Martin)

PASADENA, Calif. — NASA's InSight lander has made it to Mars, but it'll be a while before the robot is ready to start its science work.

InSight arrived at its new home yesterday afternoon (Nov. 26), acing a touchdown on an equatorial plane called Elysium Planitia. The lander will begin probing the Red Planet's interior in unprecedented detail — a few months from now.

It'll take that long for InSight to deploy and calibrate its two main science instruments, a burrowing heat probe and a suite of super-sensitive seismometers. This gear must be placed on the Martian surface by the lander's robotic arm, and InSight team members want to make sure they get this crucial step — which no other Mars robot has ever done — exactly right. [NASA's InSight Mars Lander: Full Coverage]

This work will include "terraforming" the testbed to resemble InSight's actual environs on the Red Planet,  mission instrument operations lead Elizabeth Barrett of JPL said yesterday during a post-landing news conference here.

Barrett likened deployment to a very difficult and high-stakes version of an arcade claw-machine game.

"It makes it a little bit longer — you need to take more pauses, to make sure you actually have the grapple on the payload before you lift it up, and it's actually on the ground before you let it go," Barrett said.

InSight's arm will actually perform three such placements, because it will drop a shield over the seismometer suite to insulate the instrument from wind and temperature swings, which could interfere with data collection and interpretation.

It'll take two to three months to finish the deployments, Barrett said, "and then another couple of months" before InSight's ready to begin its Mars science campaign in earnest. The additional time will be needed for the heat probe to hammer itself up to 16 feet (5 meters) below the surface, and to calibrate both instruments properly.

When they're up and running, the seismometers will be on the lookout for "marsquakes" caused by internal Martian rumblings and meteorite strikes. The heat probe, meanwhile, will gauge heat flow at different depths. InSight team members will also learn about the Martian core by measuring the slight wobbles in the planet's axial tilt — data they'll gather by precisely tracking InSight's position over time.

Together, these observations will reveal a great deal about Mars' internal structure and composition, which in turn will shed considerable light on how rocky planets in general form and evolve, mission team members have said.

InSight has already beamed home a bit of information, including a dust-speckled photo of its immediate surroundings. And this little taste — the stationary lander's first image from Mars — bodes well for future data collection, Barrett and other team members said: The area appears to be relatively flat and sandy, without lots of big rocks or other impediments to deployment.

"We were all certain that that first image would help us determine how difficult a job we would have in placing the instruments," Barrett said. "And I'm very happy that it looks like we'll be able to do it quite easily — we hope."

"InSight" is short for "Interior Exploration using Seismic Investigations, Geodesy and Heat Transport." The lander's surface mission is scheduled to run for one Mars year, which is nearly two Earth years. It'll probably take the lander about that long to gather enough data to address its main mission goals, team members have said.