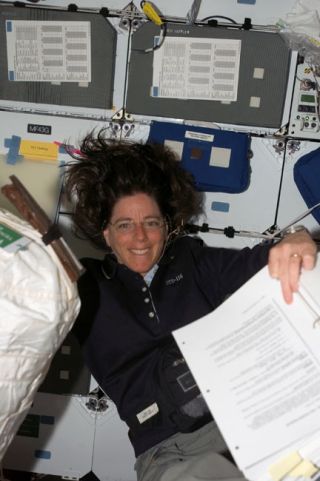 Teacher astronaut Barbara Morgan pauses for a photo while working on the middeck of space shuttle Endeavour at the International Space Station during NASA's STS-118 mission August 2007.
(Image: © NASA.)

HOUSTON -- Spacewalkers aboard NASA's shuttle Endeavour will review plans for a potential repair of their orbiter's belly-mounted heat shield Thursday while teacher-turned-astronaut Barbara Morgan beamed a space lesson to students on Earth.

NASA mission managers plan to decide later today whether to send Endeavour astronauts beneath their spacecraft's undercarriage Saturday for a risky spacewalk to patch a deep gouge in its heat-resistant tiles.

Morgan - a former Idaho schoolteacher - spoke to students at the Challenger Center for Space Science Education in Alexandria, Virginia, which was founded by the families of astronauts lost in NASA's 1986 Challenger shuttle tragedy. Morgan served as New Hampshire teacher Christa McAuliffe's backup for that ill-fated flight.

"Barb, we have been standing by, waiting for your signal from space for 21 years," said June Scobee-Rodgers, widow of Challenger commander Dick Scobee, who moderated the space-to-students chat.

Morgan told students that Challenger's lost spaceflyers, with whom she trained for spaceflight, were among her mentors.

"They were my teachers, and I believe they are teaching us today still," said Morgan, who will also speak to students at her former teaching grounds, McCall-Donnelly Elementary School in McCall, Idaho, via ham radio today.

Shuttle spacewalkers Rick Mastracchio and Dave Williams, meanwhile, will spend what was initially planned to be a half-day off at the International Space Station (ISS) discussing the potential heat shield repair. NASA delayed plans for a Friday spacewalk late yesterday, pushing the excursion to Saturday where it will serve as either an ISS construction activity or one dedicated to shuttle tile repair, NASA said.

"We're just going to walkthrough it and see if they have any questions," Joel Montalbano, NASA's lead ISS flight director for Endeavour's flight, told SPACE.com Wednesday, adding that flight controllers were working overnight to come up with the new procedures for today's review.

Endeavour mission managers are still awaiting the results of final tests that will help decide if a small, 3 1/2-inch by 2-inch (9-centimeter by 5-centimeter) wound on Endeavour's belly truly requires repair, though the agency's preliminary analysis found the fix would likely not be necessary. A small piece of falling fuel tank foam unexpectedly bounced off a metal strut to cause the ding during Endeavour's Aug. 8 launch.

The damage poses no safety risk for the shuttle's astronaut crew, but mission managers worry the ding could lengthen Endeavour's turnaround for its next ISS construction flight in February if left unchecked. A decision, one way or the other, is anticipated for later tonight.

Repairing the gouge would require Mastracchio and Williams to perch themselves on the 100-foot (30-meter) combination of Endeavour's robotic arm and inspection boom, swing under the orbiter out of direct sight of their crewmates, dab the gouge with heat-resistant paint and fill it with a caulk-like ablative goodubbed STA-54 without causing more damage in the process, NASA said.

Engineers are also evaluating a small rip in one of Masstracchio's spacesuit gloves, which forced an early end to a Wednesday spacewalk, to determine the cause of that damage and its implications for future spacewalks, the agency said.

"I think the astronauts would do a good job," John Shannon, chairman of Endeavour's mission management team, told reporters in a Wednesday briefing. "But you have to recognize that there is some additional risk."

NASA has kept a close watch on shuttle fuel tank debris and heat shield integrity since both factored into its 2003 Columbia accident.

During today's broadcast, Morgan and crewmate Alvin Drew, Jr. fielded a variety of questions ranging from whether it's possible to sleep-spacewalk to the space station's importance for missions to Mars. The questions came from students from Challenger Learning Centers across the U.S.

"The hard part is going to be learning how humans can adapt and live out in space for a very long time," Drew told students, adding that research aboard the ISS will help find answers to that challenge.

Morgan and Drew demonstrated, sometimes messily, how astronauts sleep, eat, brush their teeth and wash up in space.

After years of training, Morgan has said arriving at the space station has been an experience to behold.

"It's more than you can imagine, even with all the pictures that you've seen and everything," Morgan told reporters this week. "To see it in real life, it's amazing."

Morgan and her crewmates will also focus on transferring more of the 5,000 pounds (2,267 kilograms) of cargo they hauled to the ISS aboard Endeavour, as well as moving unneeded items and experiment results from the station to the orbiter, NASA said.