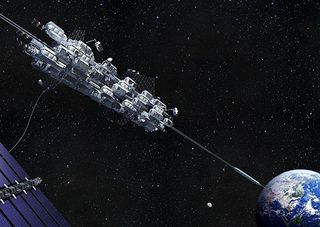 An artist's illustration of a massive space elevator transportation system. Future versions of the technology could one day fix themselves.
(Image: © Japan Space Elevator Association)

Space elevators to ferry passengers and cargo to and from orbit could be built using existing materials, if the technology takes inspiration from biology to fix itself when needed, a new study finds.

In theory, a space elevator consists of a cable or bundle of cables that extend thousands of miles to a counterweight in space. The rotation of the Earth would keep the cable taut, and climber vehicles would zip up and down the cable at the speed of a train.

The ride up a space elevator would likely take days. However, once a space elevator is built, a trip to space on the technology could be far cheaper and safer than on a rocket. Space-elevator technology is now getting tested in real life in the Japanese STARS-Me experiment (short for Space Tethered Autonomous Robotic Satellite-Mini Elevator), which arrived at the International Space Station on Sept. 27 aboard Japan's robotic HTV-7 cargo spacecraft.

The concept of the beanstalk-like elevator to space dates back to an 1895 "thought experiment" from Russian space pioneer Konstantin Tsiolkovsky. Since then, such "megastructures" have often shown up in science fiction. The key problem in creating space elevators is building a cable strong enough to withstand the extraordinary forces it would encounter. ['Pillar to the Sky': A Space Elevator Q&A with Author William Forstchen]

A natural choice for constructing a space elevator cable are carbon pipes only nanometers or billionths of a meter wide. Previous research has found that such carbon nanotubes can prove 100 times stronger than steel at one-sixth the weight.

However, currently, scientists can make carbon nanotubes only about 21 inches (55 centimeters) long at most. One alternative is to use composites loaded with carbon nanotubes, but these are not strong enough by themselves.

The scientists noted that when engineers design structures, they often require the materials for these structures to operate at just half of their maximum tensile strength, or less than that. This criterion limits the chances of structures failing, because it gives them leeway to handle variations in material strength or unforeseen circumstances. [Will We Ever Stop Using Rockets to Reach Space?]

In contrast, in humans, the Achilles tendon routinely withstands mechanical stresses very close to its

ultimate tensile strength. Biology can push materials to their limits because of continuous repair mechanisms, the researchers said.

"With self-repair, engineering structures can be designed differently and more robustly," Sun said.

For example, the motor that drives the whip-like flagella that many bacteria use for propulsion "spins at about 10,000 rpm [revolutions per minute], but it also actively repairs and turns over all of its components on the time scales of minutes," Sun said. "This is like you driving down the road at 100 mph [160 km/h] while taking out your engines and transmission to replace them!"

mechanism. The researchers found that a highly reliable space elevator was possible using currently existing materials if it underwent moderate rates of repair, such as from robots.

For example, given the commercial synthetic fiber known as M5, "a tether of mass of 4 billion tons is possible," Sun said. "This is about 10,000 times the mass of the [world's] tallest building, Burj Khalifa. More realistically, something like a carbon-nanotube composite will do the job."