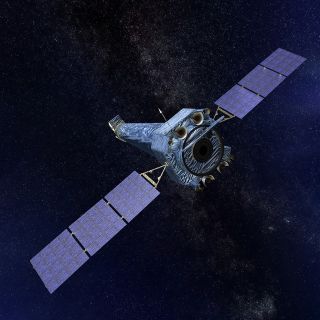 Artist's illustration of the Chandra X-ray Observatory, which launched to Earth orbit in 1999. The space telescope entered a protective safe mode on Oct. 10 because of a gyroscope issue but is on course to return to action soon, NASA officials said.
(Image: © NASA/CXC/SAO)

A flagship NASA space telescope remains on course to return to action next week.

A balky orientation-maintaining gyroscope sent the Chandra X-ray Observatory, which has been observing the heavens in high-energy light since 1999, into a protective "safe mode" on Oct. 10. But that problem is nearly solved, mission team members said today (Oct. 19).

"The Flight Operations Team has completed testing and simulation of the procedures and onboard software updates that will place Chandra into a new gyroscope configuration, with the gyroscope that caused the Oct. 10 safe mode in reserve," Chandra team members said today (Oct. 10) via the mission's Twitter account, @chandraxay. [Our X-Ray Universe: Amazing Photos by NASA's Chandra X-Ray Observatory]

"The switch is scheduled for Friday night (tonight) and will be followed by a period of collecting maneuver data to validate and calibrate the new configuration prior to resuming science observing, planned for early next week," the team added.

Chandra is one of four space telescopes NASA launched to Earth orbit from 1990 to 2003 via the agency's Great Observatories program. Two of the other three, the Hubble and Spitzer space telescopes, remain active as well. The fourth, the Compton Gamma Ray Observatory, was intentionally deorbited in 2000 after a gyroscope on the telescope conked out.

Hubble went into safe mode on Oct. 5 after suffering a gyro failure of its own. That iconic scope carries six gyroscopes and needs three functional ones to operate with maximum efficiency. Three Hubble gyros have now failed, and one that team members were hoping to recruit as a backup hasn't been behaving itself.

But NASA officials have expressed confidence that Hubble will resume its science work soon, even if the backup gyro continues to falter. Hubble can operate in one-gyro mode if needed, with another gyro kept in reserve as a backup, mission team members have said.