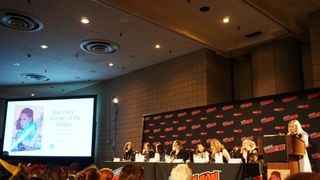 At a panel moderated by Ashley Eckstein at New York Comic Con on Oct. 4, 2018, Author Amy Ratcliffe and a host of illustrators discuss their work with the new book "Star Wars: Women of the Galaxy."
(Image: © Chelsea Gohd/Space.com)

At New York Comic Con on Oct. 4, author Amy Ratcliffe discussed the new book at a panel moderated by Ashley Eckstein, a voice actor in multiple "Star Wars" animated series, entrepreneur and creator of "Her Universe," the fashion and lifestyle company made for women who are fans of everything from "Star Wars" to "Doctor Who." The panel also included illustrators who helped bring to life the incredible characters from a galaxy far, far away.

Alongside Ratcliffe's words that convey the characters' backstories and unique qualities are 100 brand-new, stunning illustrations of the characters in a number of styles from 18 award-winning female and non-binary artists. [Tour the Millennium Falcon with These Awesome 'Star Wars' Photos]

During the panel, Ratcliffe and the artists discussed their inspirations and work with the book. Ratcliffe, Eckstein and a number of the artists on the panel pointed out how the character Ahsoka Tano has inspired them — "She saves everyone with grace and finesse," illustrator Sarah Wilkinson said.

"I think she is the original self-rescuing princess," Eckstein added about Leia. "She is the character that started it all … she broke the mold."

The panelists emphasized how incredible the women of "Star Wars" are, citing the exceptional and inspiring qualities of these characters, like Princess Leia's leadership and Ahsoka Tano's unapologetic power. The illustrators even shared some of their favorite quotes from characters that highlight these qualities, such as Ahsoka Tano's line: "Careful not to choke on your own stupidity," illustrator Annie Stoll noted.

"Star Wars" is much more than Luke Skywalker and Kylo Ren — there are dozens of women in the Star Wars universe, in the movies, comics, animated series and games who lead, battle and inspire. And "Star Wars: Women of the Galaxy" showcases 75 of these incredible women with captivating backstory and striking illustrations. The team that has created the book, from Ratcliffe to the host of female and non-binary illustrators, are passionate "Star Wars" fans and their dedication to these characters is more than apparent in "Star Wars: Women of the Galaxy."