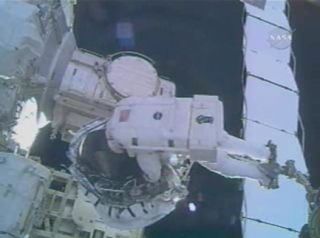 SpacewalkersRick Mastracchio and Dave Williams replaced thebroken gyroscope, one of four used to stabilize the ISS properly withoutusing Russian rocket thrusters, with a pristine replacement during a six-hour,28-minute spacewalk. The new gyroscope was powering up by the excursion's end.

JohnShannon, chair of NASA's STS-118 mission management team, said Sunday that hewould not send a spacewalker out under Endeavour's belly to repair the fragiletiles unless absolutely necessary. Such a repair could place a spacewalker atthe tip of Endeavour's 100-foot (30-meter) robotic arm and inspection boom, andruns the risk of causing more tile damage.

"Ifit's required, we'll do it. If it's not required, we won't do it," Shannonsaid in a Sunday briefing. "As to which way we'll go, well see through theanalysis over the next 24 to 48 hours."

Monday'sspacewalk began at 11:32 a.m. EDT (1532 GMT) as the ISS and the docked shuttleEndeavour passed 214 miles (344 kilometers) over China. Teacher-turned-astronautBarbara Morgan, who served as NASA's backup for Teacher in Space ChristaMcAuliffe before the 1986 Challenger accident, positioned cameras to view thespacewalk and oversaw cargo transfer between Endeavour and the ISS.

The solespacewalking task for Mastracchio and Williams was the replacement of a broken 600-pound (272-kilogram)gyroscope in the space station's U.S. attitude control system.

Known asControl Moment Gyroscope-3 (CMG-3), the gyroscope contains a large, flatstainless-steel flywheel that spins about 6,600 times per minute to helpprovide the angular momentum required to move the massive space station.

CMG-3 failed onOct. 10, 2006 when it began vibrating excessively enough to prompt flightcontrollers to shut it down. The space station only requires two functioninggyroscopes to orient itself without the aid of fuel-consuming Russian thrusters,but flight controllers would like all four operational to maintain redundancy.

"It isnice to have four," ISS flight director Heather Rarick said of the gyroscopereplacement early Monday. "We're looking forward to getting this one back."

Replacingthe failed gyroscope required spacewalkers to play an orbital shell game ofsorts to first removed the broken unit, retrieve its replacement fromEndeavour's payload bay, then stow the older one on an ISS spare parts platformfor return to Earth on a later space shuttle mission. Mastracchio and Williamsdid encounter some stubborn bolts, requiring a bit of elbow grease and a manualratchet, to loosen the new gyroscope for installation.

"I'dsay this is the most amazing ride I've ever had," Williams said from thetip of the Canadian-built robotic arm.

Whilespacewalkers worked outside the ISS, the station's Expedition 15 commanderFyodor Yurchikhin and Oleg Kotov completed the installation of a new commandprocessor, known as a BOK-3, as part of planned five-day repair of Russiancommand and navigation computer systems. The two cosmonauts completed therepair two days earlier than planned, with only cleanup work remaining.

The BOK-3installation followed work by Yurchikhin and Kotov earlier this week to replacecorroded cables that Russian engineers identified as the culprit behind amassive computer crash aboard the ISS in June.

Monday's markedthe 90th spacewalk dedicated to ISS assembly or maintenance and the 13th stagedfrom the orbital laboratory this year. It was the second career spacewalk forboth Mastracchio and Williams.

NASA planstwo more spacewalks, on Wednesday and Friday, for Endeavour's 14-dayconstruction mission to the ISS.