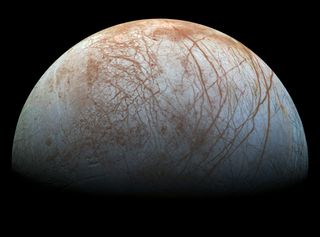 Exploring the tropics of Jupiter's ocean moon Europa would be no walk on the beach.

Equatorial regions of the potentially life-supporting Europa, which harbors a huge ocean of salty liquid water beneath its icy shell, are probably studded with blades of ice up to 50 feet (15 meters) tall, a new study suggests.

This finding should be of interest to NASA, which is developing a lander mission that will hunt for signs of life on the 1,900-mile-wide (3,100 kilometers) satellite. [Photos: Europa, Mysterious Icy Moon of Jupiter]

"Clearly, the paper suggests very strongly that the tropics of Europa are going to be spiky, and it would be unwise to plan to land there without a specially adapted lander," study lead author Dan Hobley, a lecturer in the School of Earth and Ocean Sciences at Cardiff University in Wales, told Space.com via email. "It would probably be safer to land further away from the equator!"

The driving force behind penitente formation is sublimation, the transition of a material directly from solid to gas form. An initially smooth snowpack sublimates at different rates in different spots, causing small pits to form in some places. Sunlight bounces around in these pits, boosting sublimation further in the depths and eventually creating fields of spiky ice towers.

There's no reason to believe this process is restricted to our planet. Indeed, scientists think the "bladed terrain" spotted on Pluto by NASA's New Horizons spacecraft likely consists of penitentes carved into methane ice.

Europa would seem to a good bet for penitente gardens as well; after all, it's a cold, dry, virtually air-free world that's entirely covered in ice. So Hobley and his colleagues calculated sublimation rates around the surface of the Jupiter moon and then compared those with the rates of other erosional processes. Those processes include bombardment by meteoroids and charged particles from Jupiter's powerful radiation belts.

The researchers found sublimation to be the dominant factor on equatorial Europa, the regions within 23 degrees of the moon's equator. And sublimation has likely carved penitentes into the ice there, the study team determined.

These are some serious putative penitentes, too: Some fields could feature towers up to 50 feet (15 m) tall, spaced about 23 feet (7 m) apart, the scientists found. Here on Earth, penitente heights typically range from 3 to 16 feet (1 to 5 m).

The size difference "is basically a factor of time," Hobley said. "The Europa penitentes grow much (MUCH!) slower than the Earth examples, but on Earth they might be restricted to a season or maybe two until they melt in summer or get covered in more snow, but on Europa, they are sat out in the sun growing for 50 million years."

There's some observational support for the existence of Europa penitentes as well, the researchers reported. For example, radar waves beamed at Europa from big Earth-based dishes such as Puerto Rico's Arecibo Observatory show signs of bouncing off multiple surfaces on the moon — a result that Hobley described as "really weird."

"People have tried to explain this before, but those explanations have come off (in my opinion) as pretty ad hoc," he said. "We haven't explicitly modeled it but are fairly sure that penitentes would do the trick — a lot of safety reflectors on cars, bikes, etc. work on the same principle of bouncing light between two sides of a cleft and firing it back out."

We could get a look at the putative Europa penitentes soon, if all goes according to plan. In the early to mid-2020s, NASA aims to launch a $2 billion mission called Europa Clipper, which will orbit Jupiter but study the ocean moon up close over dozens of flybys.

Clipper will assess the habitability of Europa's ocean and also scout out potential touchdown sites for the lander, which will seek out signs of life that have bubbled up to the surface, or the very near subsurface, from the dark depths.

Scientists think there's a fair amount of interaction between Europa's surface and subsurface. For example, the moon's crust may harbor plates of ice, some of which dive beneath others in alien tectonic activity.

The new paper was published today (Oct. 8) in the journal Nature Geoscience.