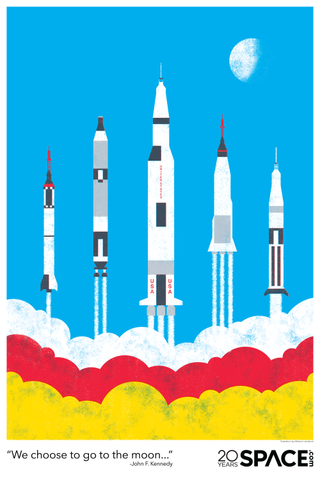 The Saturn V rocket and its predecessors soar toward open space in the first of three new posters by Space.com celebrating landmark anniversaries in space history.

It's a season of anniversaries: Oct. 1 marked the 60th anniversary of NASA becoming operational, and the Apollo moon landing's 50th — and Space.com's 20th — are coming up in summer 2019. To celebrate these milestone events in space history, Space.com is debuting a tryptic of posters, available for free to download online, as well as in person at events Space.com attends; the team debuted this poster at the Intrepid Space & Science Festival in New York last month. You can download the first poster to print in high quality here.

This first poster, celebrating the birth of NASA, shows five rockets developed by the United States on the path to space. The image was "originally just a single rocket, but then we decided to add all five rockets so we could better represent the journey toward getting to the moon," Melanie Lambrick, the illustrator behind the poster series, told Space.com. "I really wanted to go with that retro feeling [of] print posters at the time that those rockets were being made. Even though I worked mostly digitally, I tried to mimic the print processes of the '50s and '60s, so I really just used three colors and layered them in different ways, as if it was screen-printed or something like that." [Field Notes Celebrates NASA History with Memo Books, Paper Models]

Space.com's deputy director of photography, Jef Castro, told Space.com that the poster's goal was "not so much celebrating just America itself, but the whole human exploration of space and the wonder and awe … [to show] how much effort was put into designing all these different ships just with the goal of getting to the moon.

"I just love that [Lambrick] does this kind of mid-century children's-book illustration style, something that can really appeal to a younger audience — but there's a sophistication to her work that winks to an older audience," he added.

The second and third posters, which will be released later this year as 11 x 14-inch (23 x 36 centimeters) prints as well as online, depict the farthest humans have gotten into space in person as well as where space travel could someday take humanity.

"The second one is very concrete in that it deals with the moon landing, and then the third one is more looking to the future," Lambrick said. "I tried not to be too sci-fi with it. We tried to base it in the science that's out now. I think it's meant to be a journey, when you look at the tryptic."

As Space.com gears up for its 20th anniversary, the staff is looking back at the history of spaceflight, looking forward to where we're going and focusing back on the wonder that draws humans to look up in the first place.

"I'd like for people to feel that excitement that people had in the early days of space exploration," Lambrick said. "There's more and more visuals coming out about space … becoming more and more accurate, which is really interesting — but this is more about conveying that first joy and excitement about even being able to think about these things."