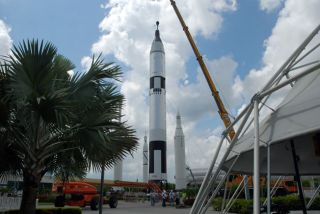 A Gemini-Titan rejoined the rockets displayed in the Rocket Garden at the Kennedy Space Center Visitor Complex in Florida on Sept. 22, 2010.
(Image: © collectSPACE.com)

Thetallest rocket now standing among the center's seven other legacylaunchvehicles ? surpassed only in length by the 224-foot Apollo-Saturn IBthat lieson its side ? the Gemini-Titan fills the openspace left by anearlier replica of the same rocket.

Removedfor a routine inspection in 2006 but deemed too far gone to berefurbished, theearlier replica was shippedin June to JohnsonSpace Center in Houston, in anticipation of the new Titan taking itsplace.

Withthe garden whole again, curator Daniel Gruenbaum said in an interviewwithcollectSPACE.com that the Gemini-Titan was not just another boosteradded tothe collection, but an important piece for telling the history of theUnitedStates in space.

"Thatpoor unsung hero of the early NASA programs," he said, referring to thetenmanned Gemini missions that flew in 1965 and 1966. "Mercuryprovedthat we could go to space and live but Gemini proved that we can livein space,we can stay in space, we can walk in space, we can dock in space, wecanrendezvous and dock, we can go to the moon."

"Wehad a model of a Gemini-Titan that sat in the Rocket Garden for manyyears ?over 20 years. It was a mockup of two first stages of Titan I vehicles,whichare similar [to the Titan II that launched Gemini] but different,"explained Gruenbaum.

Aspart of their regular maintenance program, the center's staff removedtheoriginal Gemini-Titan for inspection four years ago.

"Itwas pretty rough, structurally. It was going to take a lot of effort torebuildit," recalled Gruenbaum.

Asit turned out though, rebuilding wasn't the only option. Through acontact hemade at Lockheed Martin in Denver, Gruenbaum learned of a potentialreplacement? one that would be historically more accurate.

"Throughsome long negotiations, first with the Air Force space and missileoffice andthen the General Services Administration ? the government property arm? wewere able to obtain an actual Titan II launch vehicle and we put aGeminicapsule on it," he said.

TheTitan II missile was among a group of 18 held at the AerospaceMaintenance andRegeneration Group, the Air Force's boneyard, in Tucson, Arizona. All18rockets were scheduled to be shredded and recycled as scrap metal.

"Itwas just almost two years to actually acquire. It was arduous to get anagreement to get this vehicle to be transferred to NASA. It's now aNASAvehicle, it is not on loan," Gruenbaum told collectSPACE.com.

Obtainingthe Titanwas only half the challenge though. The rocket had been demilitarizedby theDepartment of Defense, which resulted in sections of the booster beingremovedand parts being disassembled.

Asignificant part of that work ? which ultimately took 20 months tocomplete ?required adapting a spare interstage section to patch three areas oftheTitan's stages that had been cut away to remove asbestos and otherhazardousmaterials.

Andthen there were the engines.

"Whenwe received them, they were all disassembled," explained Tom Wilkes,president of Guard-Lee. "So we had to go to original schematics andthingslike that."

Theend result is an authentic display that Wilkes said not only representsthe vehiclewell, but also the way in which the U.S. approached its early mannedspaceflight efforts.

"Fromengines up to the very top of the second stage is a warbird of thepast. Webuilt a replica Gemini to put on top of it. But in a way, that mirrorswhat happenedin the Cold War-era, because when it came time to launch men in space,weturned to our military boosters to do that," said Wilkes. "Thesethings kind of mirror that because almost all the boosters are militaryoriginand they are artifacts ? they just happen to have replica payloads onthetop."

Accordingto Wilkes, the Gemini-Titan now standing in the Kennedy Space CenterVisitorComplex's Rocket Garden also mirrors all the Gemini-Titan launchvehicleslaunched during the mid-1960s program.

"Wemodeled it off of Gemini 3 but if you line up Gemini boosters acrossand try topick one for a specific mission, it is really hard. You have to lookfor theserial numbers. There were not too many differences."

Click through tocollectSPACE.com for a photogallery showing the Gemini-Titan rocket being raised at NASA?s KennedySpaceCenter Visitor Complex.