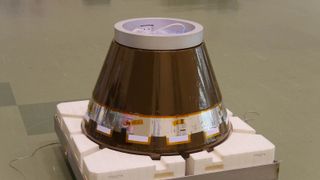 A brand-new Japanese re-entry capsule, designed to bring back experiments from space, is gearing up for its first test flight after hitching a ride to the International Space Station aboard a robotic cargo ship.

The space capsule arrived at the space station Thursday (Sept. 27) along with 5 tons of supplies on Kounotori7, the seventh uncrewed H-II Transfer Vehicle resupply ship (also known as HTV-7) launched to the orbiting lab by the Japan Aerospace Exploration Agency (JAXA). Kounotori is Japanese for "White Stork."

The HTV Small Re-Entry Capsule (HSRC) took its first trip toward the International Space Station on Sept. 22, when Kounotori7 launched into orbit from the Tanegashima Space Center in southern Japan.

The HSRC is designed to transport experiment samples back to Earth protected 3 ways: with passive, non-electric cooling, a "vacuum double layer insulation container (thermos bottle) and a heat storage unit (refrigerant),'' according to JAXA's mission page.

To prep this capsule to send back to Earth, astronauts living and working on the space station will first load experiment samples into a payload container. Another prep-step is to add a separation mechanism, which absorbs heat that would otherwise affect the parachute, onto a cylindrical structure.

This cylindrical support (made exclusively for the HSRC) goes onto the hatch at the entry of HTV-7 spacecraft's Pressurized Logistic Carrier (PLC) and makes sure the enclosure stays airtight when the hatch of the vehicle is left open, according to the space agency.

When HTV-7 undocks from the space station, the spacecraft will perform a deorbit burn to head toward Earth. Next, officials on Earth will command the release of HSRC from the vehicle, and the capsule will start re-entering our planet's atmosphere. HSRC will splash down with a parachute.

The Kounotori7's payload also included a delivery of astronaut basics, like food. The launch also sent up several spacelab units, or experiment racks, including two US experiment racks called Express Rack 9B and 10B; the second large-scale glove box for scientific experiments on the space station, called the US Life Sciences Glovebox; and the European Space Agency's Life Support Rack, which will attempt to recycle carbon dioxide and water on the space station.

Officials also sent up a special radiator equipped with a loop heat pipe, for an in-orbit demonstration at the Japanese Kibo Laboratory on the space station.

JAXA had previously scheduled the launch of the Kounotori7 for 5:59 a.m. on Saturday, Sept. 15 (in Japan Standard Time), but they canceled the launch because an ''additional investigation became necessary of the H-IIB F7 propulsion system,'' JAXA officials said in a statement released that day. (H-IIB Vehicle No. 7 is the rocket that launched Kounotori7 up into space.)