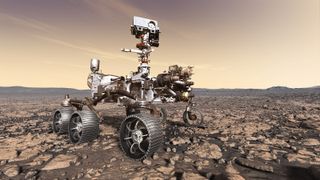 This artist's illustration depicts NASA's Mars 2020 rover studying its surroundings. Mars 2020 is targeted for launch in July or August 2020 from the Cape Canaveral Air Force Station in Florida.
(Image: © NASA/JPL-Caltech)

NASA's next Mars rover will be named by a schoolkid, just like the agency's previous wheeled Red Planet explorers.

The agency plans to run a naming competition for the vehicle, which is currently known as the Mars 2020 rover, during the 2019 school year, NASA officials announced today (Sept. 24). The contest will be open to U.S. students from kindergarten to 12th grade, who will be asked to write an essay explaining their choice.

But the agency won't be running this operation by itself. NASA is asking "corporations, nonprofits and educational organizations involved in science and space exploration" to sponsor the contest. (If you work for one such group, you can read the proposal announcement here.) [NASA's Mars Rover 2020 Mission in Pictures (Gallery)]

"We've been doing naming contests since the very first Mars rover back in 1997," Thomas Zurbuchen, associate administrator for the Science Mission Directorate at NASA headquarters in Washington, D.C., said in a statement. "Thousands of kids participate, and their enthusiasm for the contest and Mars is infectious."

That first Mars rover, Sojourner, was named by Vallery Ambroise, a Connecticut 12-year-old who wanted to honor 19th-century abolitionist and activist Sojourner Truth. Arizona third-grader Sofi Collis won the contest to name the twin rovers Spirit and Opportunity, which landed on Mars three weeks apart in January 2004. And Kansas sixth-grader Clara Ma submitted the name "Curiosity" for the car-size rover that has been exploring Mars' huge Gale Crater since August 2012.

The Mars 2020 rover is based heavily on Curiosity, sharing the same chassis and the sky-crane landing system. Like Curiosity, Mars 2020 will assess ancient Mars' ability to host life. But the new robot will go a step further as well and hunt for signs of past life. Mars 2020 also carries some fancy new gadgets, including a technology demonstration that will generate oxygen from the Martian atmosphere and a mini-helicopter that will fly scouting sorties.

As its name suggests, Mars 2020 is scheduled to launch in 2020 — specifically, in July or August of that year.

A European life-hunting rover will also launch toward the Red Planet in 2020, and that vehicle needs a name as well. The UK Space Agency is running a naming competition for the ExoMars rover; that contest, which runs through Oct. 10, is open to residents of European Space Agency (ESA) member states and "associate members."

The European rover is the second phase of the two-part ExoMars program, which is led by ESA in partnership with Russia. Phase one delivered the Trace Gas Orbiter (TGO) and a landing demonstrator called Schiaparelli to the Red Planet in 2016. Schiaparelli crashed, but TGO made it safely and is now hunting for methane and other potentially biologically interesting gases from Mars orbit.