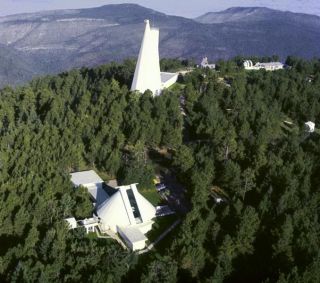 The Sunspot Solar Observatory in New Mexico was closed for 11 days in September 2018 to accommodate an FBI investigation. That investigation centered on the use of Sunspot Wi-Fi to access child pornography, according to court documents examined by the news agency Reuters.
(Image: © National Solar Observatory/NSF)

An FBI investigation into child pornography caused the peculiar closure of a New Mexico solar observatory earlier this month, according to the news agency Reuters.

The Sunspot Solar Observatory, which sits high up on southern New Mexico's Sacramento Peak, was shuttered from Sept. 6 through Sept. 16 because of a "security issue" that, until now, had remained mysterious. The lack of information spawned a rash of rumors, which ran the gamut from an alien-life detection to espionage activity.

But the truth is out there at last. Reuters got ahold of federal court documents, which revealed that the FBI was investigating the apparent use of Sunspot Wi-Fi to download and distribute child pornography. [The World's Biggest Telescopes: How They Stack Up]

An FBI affidavit examined by Reuters "identified the suspect as a janitor under contract to clean the facility, whose laptop was found to have been used to connect to the observatory's wireless system," the news agency reported Wednesday (Sept. 19).

The FBI told Reuters that the suspect has not been arrested or charged with a crime, but the case is still under investigation.

Sunspot is a facility of the National Solar Observatory, which is operated by the Association of Universities for Research in Astronomy (AURA) with funding from the U.S. National Science Foundation.

AURA representatives have stressed that they've been cooperating with authorities in the ongoing investigation, though they've kept key details, including the nature of the activity being investigated, from the public.

"We recognize that the lack of communications while the facility was vacated was concerning and frustrating for some," AURA representatives said in a Sunday (Sept. 16) statement, which announced that Sunspot would reopen the next day.

"However, our desire to provide additional information had to be balanced against the risk that, if spread at the time, the news would alert the suspect and impede the law enforcement investigation," the AURA statement added. "That was a risk we could not take."

The FBI has also stayed mum, even keeping local law enforcement personnel in the dark, according to media reports.

Nine people, from AURA and New Mexico State University, currently work at Sunspot, AURA representatives have said. Astronomers at the observatory, which was established in 1947, study solar activity, solar physics and space weather. Its main instrument is the Dunn Solar Telescope, which was completed in 1969.