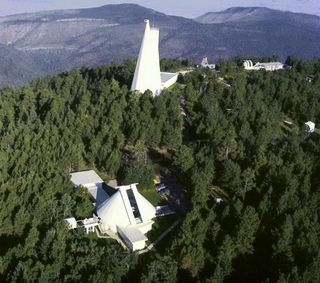 It's been more than a week, and a National Solar Observatory (NSO) facility in New Mexico is still closed for an undisclosed "security issue."

The NSO's Sunspot Solar Observatory, on Sacramento Peak in the southern part of the state, was evacuated last Thursday (Sept. 6), as was a nearby post office, according to the Albuquerque Journal. FBI agents have reportedly been investigating the site, and they're apparently keeping local law-enforcement personnel in the dark.

The Association of Universities for Research in Astronomy (AURA), which manages the Sunspot observatory with funding from the U.S. National Science Foundation, hasn't said much, either. The organization released a statement saying that AURA "is addressing a security issue" at Sunspot "and has decided to temporarily vacate the facility as a precautionary measure until further notice." AURA "is working with the proper authorities on this issue," the statement adds, without specifying who those authorities are.

And we may not get answers anytime soon. At 2 p.m. EDT (1800 GMT) today (Sept. 14), AURA Corporate Communications Coordinator Shari Lifson sent out an email update, which stated that AURA "has decided that the observatory will remain closed until further notice due to an ongoing security concern."

Unsurprisingly, the dearth of information has led to a lot of speculation about what's going on. The rumors range from the downright silly (the feds shut Sunspot down to keep news about a deadly solar superflare from getting into our panicky heads) to the intriguingly believable (this may be an espionage investigation).

"All data will be made public in its unaltered form," McAteer added. "Nothing is hidden or kept secret."

The FBI hadn't returned a phone call as of press time. The agency has consistently declined to comment on the Sunspot situation over the past week, according to other news organizations.

This story was updated at 2:30 p.m. EDT to include the latest update from Shari Lifson and James McAteer's comments.