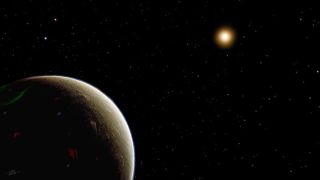 An artist's depiction of what the newly discovered planet orbiting 40 Eridani A, a star made famous by the series "Star Trek," might look like.
(Image: © Don Davis)

"Star Trek's" planet Vulcan, ancestral home of Spock and his species, just became a little more real, thanks to a team of exoplanet scientists.

Because "Star Trek" creators eventually associated planet Vulcan with a real star, called 40 Eridani A, scientists have wondered for years whether a factual equivalent of the beloved science fiction planet exists, with or without pointy-eared inhabitants. And now, a team of scientists has said that the star really does host at least one planet.

"This star can be seen with the naked eye, unlike the host stars of most of the known planets discovered to date," Bo Ma, lead author of the new research and an astronomer at the University of Florida, said in a statement. "Now, anyone can see 40 Eridani A on a clear night and be proud to point out Spock's home." [The Top 10 Best 'Star Trek' Episodes Ever]

That star, located about 16 light-years away from Earth, is also known as HD 26965. It's a bit orange, because it's a little smaller and cooler than our sun. But it also has some clear similarities to Earth's star: It's about the same age and sports a fairly similar sunspot pattern. That's good news for people hoping for real-life Vulcan residents. "HD 26965 may be an ideal host star for an advanced civilization," Matt Muterspaugh, an astronomer at Tennessee State University and a co-author on the new research, said in a statement.

Two additional stars accompany HD 26965, and they would be visible from the planet's surface. The planet itself doesn't look quite as appealing as the star, because this world seems to orbit a little too close to its sun to be in the habitable zone where liquid water can be retained on the surface. However, scientists are still pinning down precisely what other characteristics determine a planet's habitability. The newfound planet is about twice the size of Earth, and its year lasts about 42 days.

The researchers behind the discovery are excited about more than just the "Star Trek" connection, though, they said. The new find is also the first so-called super-Earth discovered by the Dharma Planet Survey, which is designed to hunt down relatively small planets around relatively bright stars.

The new research is described in a paper posted to the preprint server arXiv.org on July 18 and scheduled for publication in the journal Monthly Notices of the Royal Astronomical Society next month.