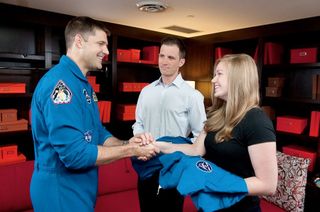 LONGUEUIL, Quebec — As Canada prepares to send astronaut David Saint-Jacques into space in December, a fellow future space flyer is teaching the next generation how to get to the International Space Station.

Canadian astronaut Jeremy Hansen is the supervisor for the 2017 class of astronaut candidates, who are expected to eventually exit low Earth orbit for missions to the moon — and perhaps even to Mars, if NASA predictions of today hold.

While journalists jostled for position here to speak to Saint-Jacques one last time before he goes into space, Hansen quietly began the support role he will play during Expedition 58/59. That includes acting as a spokesperson for the astronaut corps, picking up information to relay to Saint-Jacques and also being there for Saint-Jacques' wife and three children — close friends of the Hansen family themselves. [What It's Like to Become a NASA Astronaut: 10 Surprising Facts]

All that is on top of Hansen's normal responsibilities, chief of which is supervising these new astronaut candidates. Before they get into space, the 11 Americans and two Canadians need to pass basic astronaut training, a process that is so complex that a typical candidate needs two years to finish the work. The astronauts must master an array of basic space skills: spacewalking, geology, speaking Russian, piloting T-38 jets and learning space station operations, just to name a few examples.

While all astronauts fall under the jurisdiction of the chief astronaut at NASA Johnson Space Center (right now, that person is space shuttle veteran Patrick Forrester), Hansen is the point person for all of the astronaut candidates — managing schedules, negotiating training facility time and answering any questions or concerns the new employees might have.

"The buck stops with me. If we get to the end and they don't have the training they need, I'll be the one answering the questions about why was that not completed," Hansen said here at Canadian Space Agency headquarters during media activities for Saint-Jacques' flight in December.

While NASA does its best to provide mentorship and support for its new recruits, the training program does occasionally lose people. In late August, astronaut candidate Robb Kulin quit the corps — making him the first astronaut-in-training to resign in 50 years, since John Llewellyn did so in 1967, according to Space.com partner collectSPACE. In a statement to reporters at the time, NASA spokesperson Brandi Dean said Kulin left for personal reasons; due to privacy laws, the agency cannot discuss why.

Hansen, a former fighter pilot, and medical doctor Saint-Jacques have both been waiting in line for a spaceflight since they were selected as astronauts in 2009. Canada makes small contributions to the space station, mainly through robotics. Because space station flight assignments are based on the size of each country's contributions, and usually about 12 people go to work on the station every year, this means any Canadians need to wait a long time.

Saint-Jacques' wait has been nine years. Hansen's time on the ground could easily be a dozen years or more. But Hansen was an easy choice to lead the newest astronauts, despite the fact he hasn't flown yet, Forrester said in a brief interview in Baikonur, Kazakhstan, in June, because Hansen is a person of high integrity.

"When Pat asked me if I would be willing to do it, I said absolutely, yes. I felt it was a compliment that he had that faith in me," Hansen said.

Hansen added he feels he is well-suited for the role because he cares that the astronaut candidates get the best experience they can during their first few years of training. He doesn't work alone, either; he includes flown astronauts as mentors for the newest trainees and also works with a team of schedulers to make sure everyone gets the time they need at the facilities. An additional challenge, Hansen said, is that operations must come first — the priority for these facilities goes to crews in training for future missions, as well as people doing troubleshooting for the crew already on the space station.

Since world-famous Canadian astronaut Chris Hadfield retired in 2013, Canada's corps has been entirely comprised of rookies. This is a situation that last happened in October 1984, when Marc Garneau was the first Canadian ever to fly into space on shuttle mission STS-41G. He came from a group of several Canadians selected for astronaut training just the year before.

Canada chose two new astronaut candidates in 2017 to train alongside NASA's class. Hansen joked that he and Saint-Jacques are "kind of the blind leading the blind" because the much older astronauts are still unflown. "So [we] benefit from that culture of being all together at Johnson. We actually can contribute a lot more to the space program by being part of that team," Hansen added.