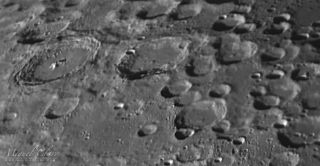 Miguel Claro is a professional photographer, author and science communicator based in Lisbon, Portugal, who creates spectacular images of the night sky. As a European Southern Observatory photo ambassador, a member of The World At Night and the official astrophotographer of the Dark Sky Alqueva Reserve, he specializes in astronomical skyscapes that connect Earth and the night sky. Join Miguel here as he takes us through his photograph "A Moonscape Scene around Moretus Crater."

A close-up view of a moonscape near the lunar south pole shows many different impact features, but one in particular might catch your attention.

The great Moretus crater (located at left), with a diameter of 70.9 miles (114 kilometers), is almost as large as Hawaii's Big Island. It features a huge central peak that towers 1.3 miles (2.1 km) above a relatively flat floor. [Latest Moon Photos from NASA's Lunar Reconnaissance Orbiter]

Due to its location near the lunar limb, the round crater appears oblong. This illusion is known as foreshortening. The rim of the crater has a wide inner wall as well as a complex outer parapet. The crater was named after the 17th-century Flemish mathematician Theodorus Moretus.

I captured this photo from the Cumeada Observatory, headquarters of the Dark Sky Alqueva Reserve in Portugal, using a ZWO ASI174MC camera and a Celestron C14 EDGE HD telescope. For an even closer view of the crater, check out these images from NASA's Lunar Reconnaissance Orbiter.

Editor's note: If you captured an amazing astronomy photo and would like to share it with Space.com for a story or gallery, send images and comments in to spacephotos@space.com.