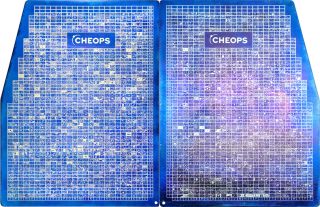 The blue titanium plates, each of which is about nearly 7 inches (18 centimeters) wide and about 9.4 inches (24 cm) tall, contain more than 2,700 miniaturized drawings between them. These artworks were selected from a huge batch that kids across Europe submitted back in 2015, as part of a competition organized by the University of Bern in Switzerland, the lead institution for the CHEOPS mission. [Gallery: The Strangest Alien Planets]

CHEOPS is a small-class mission, meaning it cannot cost ESA more than 50 million euros (about $58 million at current exchange rates). The spacecraft will measure the diameters of alien worlds whose masses are already known, allowing researchers to figure out the planets' densities (and, therefore, their rough composition).

The satellite will do this via the "transit method," studying the exoplanets as they cross the faces of their host stars from the satellite's perspective. NASA's Kepler space telescope has used this strategy to great effect, discovering more than 2,650 confirmed alien worlds to date. And NASA's recently launched Transiting Exoplanet Survey Satellite (TESS) is employing the technique to look for alien worlds around stars relatively close to our sun.

Technicians just wrapped up a series of tests on CHEOPS at the company RUAG Space in Zurich, and the spacecraft will soon be moved to ESA's technical center in the Netherlands for further trials, ESA officials said. Testing is on track to be finished by the end of the year, they added.

CHEOPS is scheduled to launch to Earth orbit from Europe’s Spaceport in Kourou, French Guiana, in the first half of 2019.

"This unique satellite, the product of European collaboration, has already inspired the young generation, seen in the drawings engraved on the plaques unveiled today as CHEOPS begins its final stages of preparations before moving to the launch site," ESA Director General Jan Wörner said in a statement Monday.