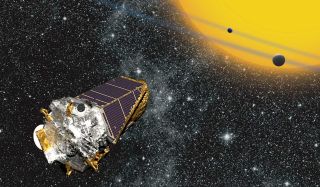 Artist's illustration of NASA's Kepler space telescope, which has discovered more than 2,650 exoplanets to date. Kepler is running low on fuel and has gone back into sleep mode, mission team members announced on Aug. 24, 2018.
(Image: © W Stenzel/NASA Ames)

The most accomplished planet-hunting instrument of all time has shut its eagle-sharp eyes once again.

NASA's Kepler space telescope, which has discovered about 70 percent of all known alien worlds to date, is running very low on fuel. In early July, Kepler intentionally went into a hibernation-like state to ensure that the spacecraft would have enough propellant left to orient itself toward Earth and beam its latest data home four weeks later.

Such data-transmission opportunities occur in limited windows; Kepler and many other far-flung NASA spacecraft must take turns using the agency's Deep Space Network, a system of big radio dishes around the world. [Gallery: A World of Kepler Planets]

The Kepler data did indeed come down to Earth as planned in early August. But Kepler has now gone back to sleep again, and the observatory's future is murky, mission team members wrote in an update today (Aug. 24).

"It is unclear how much fuel is still on board; NASA is looking into the health of the spacecraft and determining a full range of options and next steps," mission team members wrote in the update.

The $600 million Kepler spacecraft launched in March 2009 on a mission to determine how common Earth-like planets are throughout the galaxy. The telescope finds alien worlds by noting the tiny brightness dips they cause when they cross their host stars' faces from Kepler's perspective.

In May 2013, the second of Kepler's four orientation-maintaining reaction wheels failed, ending the spacecraft's primary mission, which involved the continuous surveillance of 150,000 stars. (Kepler could no longer point itself precisely enough to make the required measurements.)

But Kepler team members soon found a way to stabilize the observatory using sunlight pressure, and the telescope embarked upon a new mission, called K2. During this mission, Kepler observes different cosmic phenomena and objects, including alien planets, during 80-day "campaigns." It has completed 18 such campaigns to date.

Kepler's current confirmed-planet tally stands at 2,652, with 325 of those discovered during K2. And the telescope has flagged several thousand more "candidates"; most of these will probably be confirmed after follow-up observations or analysis, mission team members have said.

Refueling or otherwise servicing Kepler, as spacewalking astronauts have done multiple times with NASA's Hubble Space Telescope, is not an option. Whereas Hubble orbits Earth, Kepler zooms around the sun and is millions of miles away from its home planet.