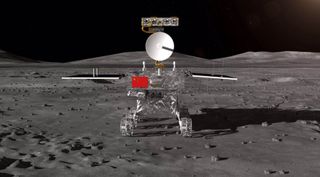 HELSINKI — China will launch its Chang'e 4 lander and rover mission in December in what will be the first ever attempt at a soft landing on the far side of the moon, authorities said Aug. 15

The announcement was made at a news conference in Beijing, held by the State Administration of Science, Technology and Industry for National Defense (SASTIND), which oversees China's space activities. The configuration of the spacecraft and a contest to name the mission rover were also unveiled.

Chang'e 4 will launch from the Xichang Satellite Launch Center in the southwest of the country atop a Long March 3B launch vehicle in December. The Chang'e 4 spacecraft will target a landing region within the South Pole-Aitken Basin, a vast impact crater of immense scientific interest, with potential landing areas previously identified in and around the Von Kármán crater. The final landing site is understood to have been selected but has not been revealed. [China's Chang'e 4 Mission Explained]

The online rover naming contest will be open until Sept. 5, with the official name to be announced in October and winners to be invited to attend the launch.

Chang'e 4 was originally manufactured as a backup to the Chang'e 3 mission which put a lander and rover on Mare Imbrium on the lunar near side in December 2013 and made China only the third country to soft-land on the moon. The mission followed two lunar orbiter missions, Chang'e 1 and Chang'e 2, launched in 2007 and 2010.

The success of Chang'e 3 saw Chang'e 4 repurposed for a more demanding mission. The lander and rover are largely similar in appearance and dimensions to their predecessors but have been adapted to the specifics of the new mission.

Wu Weiren, chief designer of China's robotic lunar program, told the state news agency Xinhua that the spacecraft has adaptable parts and an adjustable payload configuration to deal with the complex terrain on the far side of the moon, the requirements of communication via relay satellite and the science payloads. [In Photos: China's Chang'3 Moon Landing and Yutu Rover]

Visible on the newly released render of lander are the antennae for the Low Frequency Spectrometer (LFS), which will take advantage of the uniquely quiet electromagnetic environment offered by the far side of the moon. The lander will also carry a Landing Camera (LCAM), Terrain Camera (TCAM), and the German-developed Lunar Lander Neutrons and Dosimetry (LND).

Like Chang'e 3, the rover will carry a Panoramic Camera (PCAM) and Lunar Penetrating Radar (LPR). Additionally, a Visible and Near-Infrared Imaging Spectrometer (VNIS) and Advanced Small Analyzer for Neutrals (ASAN)—the latter developed by the Swedish Institute of Space Physics, Kiruna—will also be aboard.

A small biosphere experiment designed by 28 Chinese universities, containing potato and Arabidopsis seeds and silkworm eggs, will also be part of the mission.

Relay satellite in position and functioning

As the far side of the moon never faces the Earth due to tidal locking, a relay satellite is required to facilitate communications between the spacecraft on the lunar far side and ground stations on the Earth.

Named Queqiao, a satellite with a 4.2-meter parabolic antenna was launched May 20 from Xichang and entered a Lissajous orbit June 14 beyond the moon around the Earth-moon Lagrange point 2. The orbit will allow Queqiao constant line of line-of-sight with both the lunar far side and terrestrial tracking stations.

Queqiao will relay telecommands from the ground to the Chang'e 4 lunar spacecraft and transmit data and telemetry back to Earth via S-band, while using X-band to communicate with the lander and rover.

During the Wednesday news conference it was stated that the function of the relay satellite has been sound, allowing China to proceed with the launch of Chang'e 4 in December.