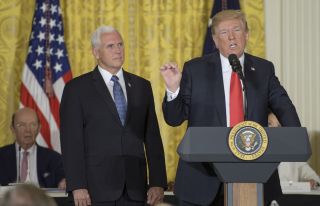 President Donald Trump ordered the Department of Defense to form a Space Force in remarks ahead of a National Space Council meeting at the White House on June 18, 2018.
(Image: © Bill Ingalls/NASA)

WASHINGTON — There are no estimates yet for what it will cost to stand up a Space Force as a separate military service. The Pentagon will request funds in next year's budget to get the process started but Congress will want to know the full costs.

Some proponents of the Space Force have argued that if portions of the Air Force or the intelligence community are carved out to form a new service that there should be no significant added costs. But that would be a fantasy, said Gen. Paul Selva, vice chairman of the Joint Chiefs of Staff.

Somehow there is a misconception out there that "this is going to be absolutely resource neutral," he said on Friday at a Mitchell Institute event on Capitol Hill. [The Most Dangerous Space Weapons Ever]

"I think we have to be wide-eyed about the kind of resources" that would be needed to support a sixth branch of the military. "Standing up an organization is generally not resource neutral," he said. Anyone who makes those assertions doesn't understand what is involved, he added. "I am trying to be as pragmatic as I can."

The president wants to do this, and "we're going to try to make it happen," said Selva. "It does require significant work with Congress to stand up a force. And we're going to have to identify the resources."

Selva said there are substantial costs associated with the support of a new service, a civilian secretary and military chief of staff. "If you're going to have a secretary who is responsible to organize, train and equip," that comes with a potentially huge price tag that should not be underestimated.

There are roughly 18,000 service members and government civilians involved in space, plus tens of thousands of contractors. Several thousand people in the intelligence community also support national security space missions.

During a meeting with reporters last week, Deputy Defense Secretary Patrick Shanahan said cost estimates have not been done yet. White House Budget Director Mick Mulvaney generally frowns on overhead costs. His guidance is to "make sure whatever you do adds value," said Shanahan.

What this means for the Space Force is that there will not be a "sprint to create big headquarters or hire chaplains or lawyers," he said. "It's really about capability, and as you stand up capability, make sure you have the right support."

Shanahan personally wrote the congressionally mandated report — which Vice President Mike Pence previewed in a speech at the Pentagon on Thursday — that lays out a plan for reorganizing the space components of the military. It says the Department of Defense will "marshal space resources into a Space Force."

But the details of who will be part of that force and how it might be organized will be part of a later discussion with the White House and Congress. "This report gives us a road map to how we get there," said Shanahan. "It doesn't actually say precisely what that force looks like and that shouldn't be the expectation."

In his speech, Pence said President Trump wants to see a civilian position reporting to the secretary of defense to oversee the new branch. That was not stated explicitly in Shanahan's report. Pence said having an assistant secretary of defense for space would be "key to the critical transition to a fully independent Secretary of the Space Force in the years ahead."

This could become a contentious item in next year's negotiations.

"It's going to take some time to work this through the Congress," said Shanahan. "If we get it in one year, it'll be unprecedented. It took nearly five years of debate in the Congress to stand up Special Operations Command."

Shanahan cautioned that he wants the transition to not disrupt the space mission. "As we go about making these changes, you know the first principle of change management is 'Do no harm,'" he said. "Space Force is about concentrating resources so we can go faster."

What he wants to see happen rather quickly is the acceleration of space technology developments and closer ties between the military and the commercial space industry. "The space force isn't just about space," said Shanahan. One of the proposed items in his report is the creation of a Space Development Agency, with the expectation that will it bring a fresh mindset and culture into space programs.

"Commercial space is the new NASA," said Shanahan. "It's very important we leverage off the work and investment that's been done there. .. We really have to get back to being more of a developmental mindset, regain our technical chops."

Shanahan noted that he has worked both in the military industrial complex and on the commercial side and it's clear that "we've made leveraging commercial technology too complicated." The concept of the Space Development Agency is "about making that easier."

He said the new agency will not replace the Air Force Space and Missile Systems Center. "I think we're going to take resources from other parts of the department and put those together" to form the Space Development Agency, said Shanahan.

One key thing that is missing now is "systems integration and connection to the warfighter," he said. The military's current satellites were "essentially developed in a hermetically sealed environment" without coordination with other programs.

Selva made a similar point in his talk on Friday. "Systems engineering is going to be incredibly important" for space, he said. "We cannot afford to have constellations of satellites not connected to one another, that are not connected to warfighters on the ground. We cannot build space systems in isolation."

The idea of a separate service for space has drawn bipartisan support in the past but there now concerns that the Space Force has been excessively politicized.

"It is extremely inappropriate for President Trump to politicize the U.S. military by having his campaign ask supporters to choose a logo for a proposed branch of the armed forces," said Rep. Adam Smith, the top Democrat on the House Armed Services Committee. "Mixing organizational decisions about national security with private political efforts should not occur," Smith said in a statement. "The House Armed Services Committee has been working to increase the U.S. military's focus on space for many years, including an effort to create a Space Corps in the National Defense Authorization Act," he added. 'If and when President Trump provides a comprehensive legislative proposal for a new space organization, Congress will review it."

Jim Bridenstine, administrator of NASA and a former congressman, noted that the full House last year passed the Space Corps bill with 344 votes "which is a very big bipartisan vote."

In an interview on C-SPAN Newsmakers, Bridenstine said he fully supports the proposal to create a Space Force. Although NASA is a civilian agency, it has "hundreds of billions of dollars worth of assets in orbit, plus we have our astronauts in orbit, and we are dependent on space being safe and accessible, and that's important for the science we do, the discovery and exploration."

The security of space also is critical to the commercial industry and the broader civilian economy, said Bridenstine. "At the end of the day, all the technologies we are developing at NASA, we want to commercialize. The space economy represents about $350 billion annually," he said. "The president has made a determination that it needs to be protected."

The Air Force is now doing the national security mission, he noted. "There have been arguments made that we don't want the space domain to compete with the air domain given how important it is to the American way of life. It's because of how it's becoming more contested every day."