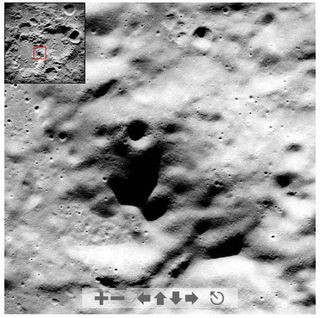 If a picture is worth a thousand words, then the 24astronauts who launched to the Moon almost 40 years ago returned a tome some72,000 pages long.

And since their journey from the Moon back to the Earth,their collective 36,000 literally irreplaceableimages have remained in deep-freeze storage at NASA Johnson Space Center inHouston, Texas. With only a few exceptions, the majority of the photos seen bythe public have been duplicates made from copies of the originals produced bythe space agency between 1968 and 1972.

And like anyone who has duplicated a copy knows, the resultis never as crystal clear as the original.

It is with that in mind that Arizona State University haspartnered with NASA to scan the space-flown camera film in an effort to createa new, high-resolution digital archive for both researchers and the generalpublic on the Internet.

Begun in June 2007 and expected to take three years tocomplete, the Apollo Image Archive is the first projectto make digital scans of all the lunar photographs ? both from orbit and on thesurface ? captured during NASA'sApollo missions.

"This project fulfills a long-held wish of mine,"said Mark Robinson, principal investigator for the camera that will fly onNASA's Lunar Reconnaissance Orbiter, due for launch in October 2008."It'll give everyone a chance to see this unique collection of images asclearly as when they were taken." Robinson is also a professor at ASU'sSchool of Earth and Space Exploration.

"We worked with the scanner's manufacturer -- LeicaGeosystems -- to improve the brightness range that the scans record,"explained Robinson. In technical terms, a normal 12-bit scan was increased to14-bit, resulting in digital images that record more than 16,000 shades ofgray.

"Similarly," added Robinson, "to get all thedetails captured by the film, we are scanning at a scale of 200 pixels permillimeter." As a result, the grain of the original film is visible whenthe scans are fully enlarged.

"That's bigger than most people want to look at with abrowser," observed Robinson, "even if their browser and internetconnection are up to the job." So the archive's website uses a Flash-basedapplication called Zoomify, which lets users dive deep into a giant image byloading only the portion being examined.

Users can also download images in several sizes, up to thefull raw scan.

When finished, the archive will include about 600 frames in35 mm, roughly 20,000 Hasselblad 60 mm frames (color, and black and white),more than 10,000 mapping camera frames and about 4,600 panoramic cam frames.

"Thesephotos have great scientific value, despite being taken decades ago,"concluded Robinson. "I think they also give everybody a beautiful look atthis small, ancient world next door to us."