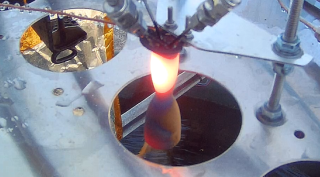 LOGAN, Utah — Stellar Exploration, a space technology company based in San Luis Obispo, California, is in the midst of qualification testing of a miniature propulsion system for planetary microsatellite missions.

What's unusual about the technology Stellar Exploration developed with Malin Space Science Systems of San Diego is its power, said Mike Loucks, president of Space Exploration Engineering, a Seattle company that specializes in cis-lunar, lunar and deep space missions. The new thruster fueled with hydrazine and nitrogen tetroxide is designed to move a 12-unit cubesat, which weighs about 28 kilograms, at a speed of two kilometers per second.

"The miniaturized bi-prop system Stellar has developed suddenly allows cubesats to take on the missions normally associated with much larger and more expensive spacecraft," Loucks said by email. "None of the currently marketed propulsion systems for cubesats are even in the same ballpark. This is a serious, grown-up propulsion system based on well-known technology that allows microsatellites to bust out of the kiddy pool." [Wild Ideas for Superfast Space Propulsion]

Stellar Exploration developed the new thruster with funding from NASA's Small Innovative Missions for Planetary Exploration program, which supports the formulation and development of small spacecraft science missions. The company is proposing to fly it for the first time on a cubesat that would ride to Mars along with NASA's Psyche asteroid exploration mission in 2022. Psyche is slated to perform a Mars fly-by, which means a cubesat riding along will need its own powerful propulsion to enter Martian orbit.

"We are looking for other potential applications," said Tomas Svitek, Stellar Exploration president. The new thruster could be used, for example, on a small robotic lunar lander, a microsatellite moving from geostationary transfer orbit to geostationary orbit or a satellite traveling in a highly elliptical polar orbit, known as a Molniya orbit, Svitek told SpaceNews at the Small Satellite Conference here.