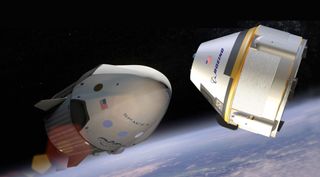 Certification of both Boeing's CST-100 Starliner (right) and SpaceX's Crew Dragon could slip into 2020, the GAO warned in a new report, raising the risk of a gap in NASA access to the ISS.
(Image: © SpaceX artist's concept and Boeing)

SpaceX and Boeing won't be flying crewed test flights of their new astronaut taxis until well into 2019, according to a new schedule NASA released today (Aug. 2).

The new launch schedule comes just a day before the agency will announce which astronauts will be aboard which company's test and maiden crewed flights as the space community continues its quest to bring human spaceflight back to the U.S.

Before today's announcement, NASA had officially planned for both SpaceX and Boeing to fly uncrewed test flights of their capsules — known as Crew Dragon and the CST-100 Starliner, respectively — this month. Boeing was scheduled to launch its first crewed test mission in November 2018, with SpaceX's equivalent flight coming the next month.

Now, however, the SpaceX uncrewed flight is scheduled for November 2018 and its crewed successor for April 2019 — edging in front of Boeing's planned launches.

Boeing's uncrewed test flight is now targeted for "late 2018/early 2019," and the crewed debut is planned for "mid-2019." That news from NASA follows after Boeing announced yesterday (Aug. 1) that it would delay the launches on a similar schedule, which came in the wake of recent troubles with its launch abort engines during a static fire test. Boeing did not specify whether the delay was due to that issue, however.

Less than a month ago, a government report raised concerns that the slow progress of commercial human spaceflight systems would leave U.S. astronauts stranded on Earth, without a way to reach the International Space Station (ISS). NASA astronauts have relied on Russian Soyuz spacecraft to get to and from the ISS since the retirement of the space shuttle fleet in 2011.