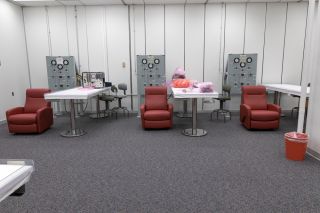 One of three suit containment rooms, where astronauts once got and will again get dressed for their visits to space.
(Image: © Kim Shiflett/NASA)

If all goes well, astronauts will soon launch from the U.S. for the first time in seven years — so NASA gave their departure lounge an upgrade.

Wrapping up shortly, the renovations represent the first makeover of the facility, located at Kennedy Space Center in Florida, in more than two decades, according to a NASA statement.

Even though the facility hasn't been used for quarantine or last-minute mission preparation since the end of the shuttle program, in 2011, about 150 astronauts have stayed at the location each year recently, NASA said. But between NASA's Orion capsule and commercial crew programs from Boeing and SpaceX, a lot of astronauts will need a place to stay in the U.S. before they leave Earth. [Photos of NASA's Last Space Shuttle Launch]

Hence the renovation. "A lot of the astronauts have been amazed at how nice and clean and fresh everything looks," Lauren Lunde, who manages the quarters, said in the statement. NASA didn't specify how long the work has been under way or how much it cost.

The entire crew quarters stretch across about 26,000 square feet (2,400 square meters) and include 23 bedrooms, a kitchen and dining room, and a gym. The facility also includes more-traditional offices and conference rooms, as well as the so-called suit room, where astronauts get dressed for their launches.

The renovations, the first major work on the crew quarters since 1994, included replacing carpet and ceiling tiles, repainting walls, and upgrading appliances. The former suit room was also modified to create three separate suit containment rooms for the three groups that will use the facility, NASA's Orion program, Boeing and SpaceX.

Despite that trio of groups that will use the facility, NASA expects fewer people to stay there than at any time than during the shuttle era. Combined, the facility should see a maximum of only 16 to 18 guests at a time, NASA said, rather than having all 23 bedrooms filled.

The higher vacancy rates will be due to two new developments. The first is that all three new capsules will carry fewer people at a time than the shuttle did: from two to four crewmembers instead of from five to seven. And NASA has bulked up its quarantine guidelines, so it will have more staff members who support the crews staying nearby rather than staying in the building itself.

The first wave of visitors to the upgraded facility should arrive soon, in time for the uncrewed SpaceX and Boeing test flights that are currently scheduled for August. Experts suspect, however, that these flights will be delayed by months.

Those first visitors will likely include the astronauts selected to fly on the first crewed tests and full-fledged missions of the SpaceX and Boeing systems. These crews will be announced on Friday.