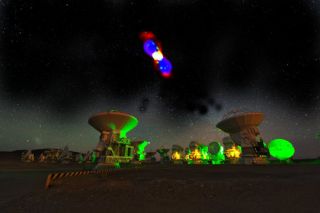 Color reproductions show different parts of the nebula, in its "cool phase," surrounding the star CK Vul. 26AlF, which is now the first detected radioactive molecule in space, can be seen in cyan, green and yellow.
(Image: © T. Kamiński; ESO/Y. Beletsky/ALMA photo)

For the first time ever, scientists have detected a radioactive molecule in space — and it came from an ancient stellar explosion.

In the 17th century, astronomers saw a nova shining brightly in the Vulpecula constellation. But while they could see the star with the naked eye, it wasn't until 2013 that astronomers were able to tracean unusual isotopic molecular gas to the stellar event, reigniting interest in the nova. Now, in a new investigation, an international research team, led by Tomasz Kamiński from the Harvard-Smithsonian Center for Astrophysics,has shown that the nova was likely caused by the merger of two starsin what is known as a red nova. In a red nova, two stars merge in an explosive event, cool off, and then, in this "cool phase," produce large amounts of molecular gas and dust.

This team has observed this molecular gas, 26AlF, a radioactive isotope of aluminum, 26Al, in the remnants of the nova, known as CK Vul (or Nova Vul 1670). This is the first time that a radioactive molecule has been detected in space. This is also the first time that an object that produces 26AlF has been directly identified, according to the study published today (July 30) in the journal Nature Astronomy. [Kilonova Photos: Hubble Telescope Spies Cosmic Explosion]

By observing 26AlF, scientists can better understand how the merger in CK Vul happened, according to a statement. Additionally, studying the merger process shows that a stellar collision, like this red nova, can expose even the deepest layers of a star, according to the statement. In this collision, the research team has found that, in the low-mass binary system that merged, there was a red-giant-branch star with a mass between 0.8 and 2.5 solar masses.

But, while this study has shined new light on this ancient collision, it has also raised new questions. It has been known for years that there are about two solar masses of 26Al across the galaxy, according to the statement. It is still unclear where this radioactive material originated, but with estimates of the mass of 26AlF in CK Vul, researchers think that the merger can't be solely responsible for all of the isotope detected, according to the statement. So, the amount of the isotope found and its origin in the galaxy remain a bit of a mystery.

Still, this research has highlighted CK Vul — an object that had not before been considered as a 26AlF producer. Through this work, the research team has also found that tools like the Atacama Large Millimeter/submillimeter Array (ALMA) could be more useful in searching for 26Al producers than gamma-ray observatories, according to the statement. This could be useful in future investigations of the stellar remnants and 26AlF in the galaxy.