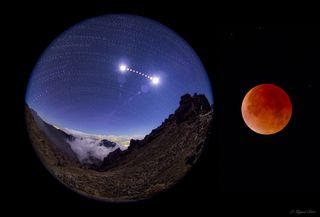 This photo sequence shows the progression of a total lunar eclipse on Sept. 28, 2015, captured from the Canary Islands using a circular fish-eye lens. The circle on the left shows the approximate size of planet Earth compared to the moon.
(Image: © Miguel Claro)

Miguel Claro is a professional photographer, author and science communicator based in Lisbon, Portugal, who creates spectacular images of the night sky. As a European Southern Observatory photo ambassador, a member of The World At Night and the official astrophotographer of the Dark Sky Alqueva Reserve, he specializes in astronomical skyscapes that connect Earth and the night sky. Join Miguel here as he takes us through his photograph "Total Lunar Eclipse of 2015."

During a lunar eclipse, the moon passes through Earth's shadow, giving the natural satellite a blood-red hue. The lunar eclipse photographed here was very unusual, because it coincided with the moon's perigee, or closest approach to Earth. When the moon reaches this point on the same day as it becomes a full moon, it's popularly known as a supermoon. The next supermoon total lunar eclipse won't be until Jan. 21, 2019, but today's historic eclipse will be "super" in its own right, as it will be the longest total lunar eclipse of the century.

For the composite image on the left, I used a circular fish-eye lens to capture the sequence of the totality from the Canary island of La Palma. The "little planet" image on the left also shows the approximate size of Earth compared to the moon. You can see this at the right side of the image in a close-up view of the same eclipse, showing its dark red color. [Amazing Photos of the Rare Supermoon Total Lunar Eclipse of 2015]

During a regular supermoon, the full moon appears up to 14 percent larger and 30 percent brighter than usual. But supermoon eclipses can make the natural satellite appear even darker than it does during other total lunar eclipses.

"Supermoon eclipses should be a bit darker. Because of its closeness to Earth, a supermoon passes deeper into the shadow of our planet," Richard Keen, an atmospheric scientist at the University of Colorado, told Spaceweather.com.

Today (July 27), if you are in Africa, Europe, the Middle East, southern Asia or on a boat somewhere in the Indian Ocean, you will be able to watch the moon dip entirely into Earth's shadow during the total lunar eclipse. Skywatchers in Australia and South America will also be able to see the eclipse, but only in its partial form. Viewers in North America can watch the event via live webcasts.

The next lunar eclipse visible from North America will occur Jan. 21, 2019.

Editor's note: If you captured an amazing photo of the total lunar eclipse and would like to share it with Space.com for a story or gallery, send images and comments to managing editor Tariq Malik at spacephotos@space.com.