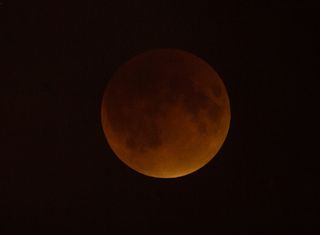 The first "supermoon" total lunar eclipse in more than three decades did not disappoint, with the moon thrilling skywatchers around the world as it passed through Earth's shadow.

On Sunday evening (Sept. 27), the slightly-larger-than-normal full moon shined brightly in Earth's skies and then dove into the planet's shadow, turning a gorgeous reddish-gold color as observers with clear skies enjoyed the view. The event marked the first supermoon total lunar eclipse since 1982, and the last until 2033 — and it was visible to potentially billions of people across the Western Hemisphere and parts of Europe, Africa and Asia.

Space.com received images from lunar-eclipse observers from across the United States and Canada, as well as Mexico, the United Kingdom and elsewhere. [See More Amazing Photos of the 2015 Supermoon Total Lunar Eclipse]

"Total lunar eclipse! Got It!" photographer Victor Rogus wrote Space.com excitedly after capturing a spectacular close-up view of the blood-red moon. "Lots of clouds here in Manatee County, Florida, and rain on the way, but I managed this image through thin clouds, almost total coverage before clouds doomed my efforts!"

In Escondido, California, observer John Melson captured the lunar eclipse as the moon was rising over nearby hills. In his photo, the moon is partially obscured by Earth's shadow, and appears enormous on the horizon.

"Looks like the Death Star (almost)," Melson wrote Space.com in an email.

In New York City, NASA photographer Joel Kowsky captured a series of awesome images of the lunar eclipse over the Empire State Building. Elsewhere in the city, Space.com producer Tom Chao joined skywatchers at Carl Schurz Park on the Upper East Side, where several hundred people gathered to witness the eclipse.

"People are lining up to use telescopes, but I brought my own binoculars," the prepared Chao said.

South of New York City, in West Orange, New Jersey, a thick and stubborn layer of clouds blocked any view of the hours-long lunar eclipse. Would-be lunar observers in that city, including Space.com managing editor Tariq Malik, had to make do with live webcasts provided by the Slooh Community Observatory, NASA, the Griffith Observatory in Los Angeles and other institutions.

The science of supermoon eclipses

There's nothing supernatural about supermoons. They're the natural result of the moon's elliptical path around Earth, which dictates that the satellite is 31,000 miles (50,000 kilometers) nearer to Earth at its closest point (known as perigee) than at its most distant (called apogee).

Supermoons are full moons that occur at or near perigee. Such full moons appear about 14 percent larger and 30 brighter in the sky than apogee full moons (which are also called "minimoons").

Every supermoon is therefore a worthy skywatching target. And a supermoon total lunar eclipse — that's a really big deal.

The moon does not go completely dark during a total eclipse; some sunlight is refracted around Earth, passes through the planet's thick atmosphere and hits the lunar disk.

"Because of this, almost all colors except red are 'filtered' out, and the eclipsed moon appears reddish or dark brown," NASA officials wrote in a statement. "This filtering is caused by particulates in our atmosphere; when there have been a lot of fires and/or volcanic eruptions, lunar eclipses will appear darker and redder. This eerie — but harmless — effect has earned the phenomenon the nickname 'blood moon.'"

Lunar eclipses occur when the sun, Earth and moon all line up, with Earth in the middle. During a solar eclipse, on the other hand, the moon comes between Earth and the sun, blocking out some or all of the solar disk from skywatchers' perspective.

Editor's note: If you captured an amazing view of the supermoon lunar eclipse that you would like to share with Space.com for a possible story or gallery, send images and comments to managing editor Tariq Malik at: spacephotos@space.com.