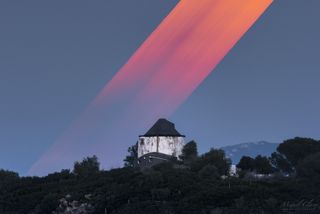 A Super Blue Moon rises behind a windmill in Sesimbra, Portugal, in this long-exposure shot by astrophotographer Miguel Claro.
(Image: © Miguel Claro)

Miguel Claro is a professional photographer, author and science communicator based in Lisbon, Portugal, who creates spectacular images of the night sky. As a European Southern Observatory photo ambassador, a member of The World At Night and the official astrophotographer of the Dark Sky Alqueva Reserve, he specializes in astronomical skyscapes that connect Earth and the night sky. Join Miguel here as he takes us through his photograph "The Path of Light from a Super Blue Moon."

Orange moonlight streaks across the evening sky as the Super Blue Moon rises behind a windmill in Sesimbra, Portugal, on Jan. 31, 2018.

The second full moon of the month is well known as a Blue Moon. Supermoons happen when a full moon approximately coincides with the moon's perigee, or the point in its orbit where it's closest to Earth. This makes the moon appear up to 14-percent larger and 30-percent brighter than usual.

In this photo, the orange path of light was not related to the reddish color that can be seen during a total lunar eclipse. Rather, the rising moon can appear red-orange when it is near the horizon due to the way light scatters in the atmosphere.

When the moon is low on the horizon, moonlight passes through more of Earth's atmosphere than when it is overhead. By the time light reaches the observer, the blue and green light has already been scattered, leaving only the red-orange light.

Super Blue Moon, Rising Behind a Mill from Miguel Claro on Vimeo.

This effect can be exaggerated by any of the factors that cause sunsets to be more vivid, such as clouds, pollution, dust and volcanic activity. This color change can also be seen during a time-lapse video I captured of this same scene.