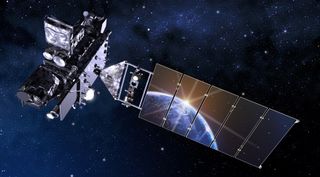 NOAA says they have restored some performance in the primary Earth-facing instrument on the GOES-17 (formerly GOES-S) satellite, but have yet to fully correct the problem or determine its root cause.
(Image: © Lockheed Martin)

WASHINGTON — Engineers have made some progress in restoring the performance of the key instrument on a weather satellite launched earlier this year, but have yet to fully correct the problem or determine its root cause, the National Oceanic and Atmospheric Administration announced July 24.

In a teleconference with reporters, NOAA officials said they had been able to improve the availability of infrared and near-infrared channels on the Advanced Baseline Imager (ABI) instrument on the GOES-17 satellite since the agency first reported the problem two months ago. The spacecraft, originally known as GOES-S, launched in March.

"ABI is already demonstrating improved performance from what was initially observed," said Pam Sullivan, director of the GOES-R system program. Currently, 13 of the instrument's 16 channels are available 24 hours a day, with the other three able to operate at least 20 hours a day. [GOES-S: NOAA's Next-Gen Weather Satellite in Photos]

That will change, though, on a seasonal basis, depending on the amount of sunlight that shines into the instrument. By September, the hottest part of the orbit, only 10 of 16 channels will be available 24 hours a day, she said, with the other six available "most of the day."

As one team works to improve the performance of the ABI on GOES-17, another team is tracking down the root cause of the instrument. Sullivan said the issue appears to be with loop heat pipes that contain propylene coolant. "It doesn't seem to be flowing appropriately through the loops," she said.

She said that team has identified a "small handful" of likely causes for the lack of coolant flow. They include "excess non-condensable gas" or foreign object debris in the pipes. "Either one of those might prevent the fluid from traveling though the loop heat pipe as intended," she said. There could also be mechanical damage to the pipes.

When NOAA first announced the problem with the ABI on GOES-17 in May, the agency said they did not see a similar problem with an identical instrument on GOES-16, the first of the GOES-R series of next-generation weather satellites launched in 2016. However, Sullivan said that, since then, engineers have seen "some evidence of reduced functionality" in the loop heat pipes in that spacecraft's ABI, but one that has not affected the performance of the instrument.

Sullivan said, in the case of GOES-16, the problem had existed from the beginning of the mission but was only noticed when engineers took a closer look at the instrument's performance. "There's no signs at this point that the GOES-16 performance is changing now," she said.

NOAA still expects to put GOES-17 into service later this year as GOES-West at 137 degrees west, replacing GOES-15 at that orbital slot. "Even during this checkout phase, GOES-17 is observing with more channels and a higher resolution with more rapid refresh than what we currently have with the current GOES-West satellite," Sullivan said. "While we're not going to get the full GOES-17 functionality, we are going to receive more and better data then we currently have."

NOAA added that it can augment data from other sources, including other GOES satellites as well as from Japanese Himawari satellites, which also have a version of the ABI instrument. The National Weather Service doesn't expect this problem to have an effect on its ability to produce weather forecasts.

"Right now, we have an operational constellation," said Joe Pica, director of the National Weather Service's Office of Observations. "We're able to carry out our mission today without any degradation."

The problem, though, could delay the launch of the next satellite in the series, GOES-T, currently planned for 2020. "We haven't given up on that yet," Sullivan said of that planned launch date. "However, we really need to decide what modifications and what testing we want to do on the GOES-T instruments before we confirm those dates."

"There's no doubt that the problems we are experiencing with the cooling system are disappointing, and not what we expected of GOES-17 when we launched," said Steve Volz, director of NOAA's Satellite and Information Service. "But we are committed to getting this right. We will figure out what happened on GOES-17 so that it doesn't occur again on our other GOES satellites."