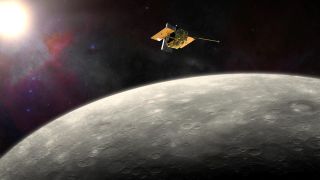 NASA's MESSENGER probe traveled for more than 6.5 years through space before it entered Mercury orbit in 2011.
(Image: © NASA/JHU-APL)

After NASA's Mercury Surface, Space Environment and Geochemistry Ranging (MESSENGER) mission ended in 2015, the crust of the solar system's innermost planet was thought to be roughly 22 miles (35 kilometers) thick. However, one scientist now disagrees.

Michael Sori, from the University of Arizona's Lunar and Planetary Laboratory, believes that Mercury's crust is just 16 miles (26 km) thick and denser than aluminum. His new estimate supports the theory that the crust formed largely through volcanic activity.

Sori sought to determine what type of "isostasy" is at work on Mercury. Gravity is constantly trying to pull a planet's surface into a smooth sphere, so something must counteract this pull to keep a world's peaks and chasms from melting away. Isostasy describes the processes behind that "something." [Photos of Mercury from NASA's Messenger Spacecraft]

There are two basic kinds of isostasy: Pratt and Airy. Both invoke balancing the masses of various parts of a planet, but they go about it in different ways. Pratt isostasy posits that the density of a planet's crust varies from spot to spot, whereas Airy holds that crust depth depends heavily on topography.

Sori set out to relate Mercury's density to its topography. Scientists had already constructed a topographic map using data collected by the Mercury-orbiting MESSENGER — the only probe ever to orbit the planet — but a map of density didn't exist. So Sori made his own, using data about the elements found on Mercury's surface.

Pratt isostasy predicts that high-density minerals should be concentrated preferentially in craters and low-density minerals in mountains. But Sori found no such correlation, so he rejected the idea.

That left Sori with Airy isostasy, a model that's been used to estimate Mercury's crustal thickness in the past.

"These arguments work in two dimensions, but when you account for spherical geometry, the formula doesn't work out," Sori said.

However, a formula developed by Isamu Matsuyama, also from the Lunar and Planetary Laboratory, and Douglas Hemingway from the University of California, does work for spherical bodies like planets. Instead of balancing the masses of the crust and mantle, it balances the pressure the crust exerts on the mantle, providing a more accurate estimate of crustal thickness.

Sori used his density estimates and the Matsuyama-Hemingway model to calculate his new crust-thickness figure.

Sori’s study, "A Thin, Dense Crust for Mercury" was published in the journal Earth and Planetary Science Letters this past May.