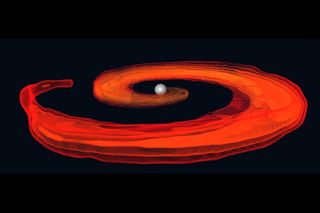 An artist's depiction of a neutron star and a black hole colliding.
(Image: © A. Tonita, L. Rezzolla, F. Pannarale)

A so-far unseen celestial collision could be astronomers' best bet for figuring out just how quickly the universe is expanding.

Right now, physicists have two ways of measuring that expansion rate, and both are quite precise — but their answers don't match. That's been frustrating, since the number, known as the Hubble constant, feeds calculations like the ones scientists use to estimate how old the universe is.

And that's why they're looking for a third method to pin it down. A pair of scientists based in Massachusetts think the trick will be catching a glimpse of the violent phenomenon of a black hole and a neutron star colliding. [Did a Neutron-Star Collision Make a Black Hole?]

"Black hole-neutron star binaries are very complicated systems, which we know very little about," Salvatore Vitale, a physicist at the Massachusetts Institute of Technology, said in a statement. "If we detect one, the prize is that they can potentially give a dramatic contribution to our understanding of the universe."

So far, scientists haven't observed the collisions of a mixed pair, only of binary black holes and of binary neutron stars. Most of those observations have included only black holes, so the collision can only be detected using gravitational waves. Astronomers know they also need a light signal to calculate the Hubble constant, which leaves them looking for either pairs of neutron stars or black hole-neutron-star binaries.

But when physicists tried to calculate the Hubble constant from the data they gathered during August's neutron-star merger — the first ever observed — they couldn't be very confident in the result. That's because neutron-star collisions are a mess, shooting out material asymmetrically and making it difficult for scientists to figure out just how far away a signal is coming from.

Switch out one of those neutron stars for a black hole and the mess becomes more manageable, giving physicists the location they would need to recalculate the Hubble constant. But scientists think these mixed collisions are rarer, so Vitale and his colleague wanted to check whether the benefit of the more precise location outweighs the handicap of the mergers being less common.

That work was detailed July 12 in an article published in the journal Physical Review Letters and posted to the pre-print site arxiv.org.

According to their estimates, just one mixed merger should let physicists calculate the Hubble constant as effectively as combining data from 50 different neutron-star collisions.

Now, all we have to do is wait for a lucky strike.