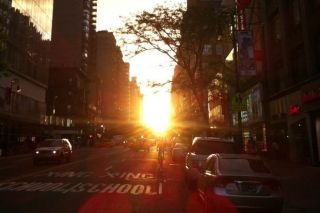 Max Andrade captured this photo of a July 2013 Manhattanhenge sunset from the corner of 86th Street and 3rd Avenue using his iPhone.
(Image: © Max Andrade)

Today and tomorrow (July 12 and July 13) are two of the most special skywatching days of the year — if you happen to be in New York City.

Weather permitting, folks in the Big Apple's most famous borough can observe a gorgeous "Manhattanhenge" sunset on both days. And the next opportunity to get such an eyeful won't come until next spring.

"Occurring twice in May and twice in July, the unique phenomenon features a perfectly aligned sunset beaming down the east- and westward roads of the borough’s grid," Accuweather explained. "The result is a dazzling glow that illuminates the north and south sides of the streets' towering buildings."

Manhattanhenge's name, of course, is a nod to the ancient British monument Stonehenge, which was built with the sun's path through the sky in mind. Every year on the northern summer solstice, an observer standing at a special spot within Stonehenge sees the sun rise directly over the landmark's "heel stone."

So keep your eyes peeled, New Yorkers! You too, tourists — but don't gawk so single-mindedly at Manhattanhenge that you get hit by a bus.