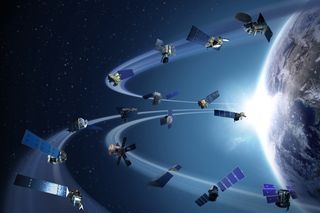 Mackenzie Thompson manages marketing and mission fulfillment initiatives with the Disque Foundation and the Save a Life Initiative, which help communities learn lifesaving techniques like CPR — a valuable skill to have both on Earth and in space. Thompson contributed this article to Space.com's Expert Voices: Op-Ed & Insights.

America's space program is a necessity, not a luxury. While we should not have to qualify its importance, it is helpful to remember the good that NASA does: The agency employs over 18,000 people and indirectly employs tens of thousands more at various aerospace companies; NASA funds scientific research in fields ranging from astronomy to human health, and its fleet of Earth-observing satellites provides us with potentially lifesaving information.

Consider, then, what life would be like without NASA's satellites. Those that monitor our planet from space provide crucial data for weather forecasts and climate science, but they can also help people during natural disasters. [Top 10 Game-Changing Earth Photos From Landsat Satellites]

For example, NASA uses rainfall data collected by satellites to help predict landslides, and the agency aided in California's wildfire response by mapping the damage from space. NASA satellites also helped to map the extent of the damage when Hurricane Harvey flooded Houston. By mapping the seafloor, satellites can help scientists predict tsunamis. Satellite views are also helpful during volcanic eruptions by providing maps of fissures and dangerous lava flows. Earth-observing satellites can alert people throughout the world about such events in real time, so people can evacuate sooner, and emergency supplies — including medicine, food and drinking water — can quickly reach those in need.

Emergency response efforts during natural disasters are as much a social endeavor as it is a technological one, and the delivery of emergency aid depends on what we do in the heavens as much as what we do on the ground. For example: How can emergency responders know where to go, and whom to help if we do not have real-time information about the areas ravaged by a hurricane or threatened by wildfires? How can we pinpoint a village outside Nairobi, Kenya, where parents and residents can most benefit from learning CPR if there is no network of satellite communications?

Instead of taking such a network for granted, people in the U.S. should express their support for NASA and encourage policy makers to strengthen this network. We should do more to recognize the indispensability of the space program, because NASA's satellites do important work to help people on Earth — beyond just looking at things out in space. Their transmissions give the world the means to think and act on a global scale when faced with disasters that put people's lives at stake.

Think, for instance, of the paramedics who would be unable to successfully execute searches, and the rescue missions that would never start, if there were not enough satellite images or GPS technology to guide them.

That thought alone is cause for concern, lest we undermine or neglect the importance of this network. The more we discuss this situation, and the more we invest ourselves in this effort, the safer we will be. And the sooner we can transmit this news worldwide.