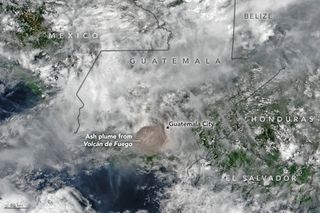 Satellites are keeping tabs on a powerful volcanic eruption in Guatemala that has killed dozens of people.

Volcan de Fuego, which lies about 40 miles (70 kilometers) southwest of Guatemala City, has been simmering for years, occasionally flaring up with bouts of dramatic activity. Tragically, one such outburst occurred on Sunday (June 3).

"A deadly mixture of ash, rock fragments, and hot gases rushed down ravines and stream channels on the sides of the volcano," officials with the NASA Earth Observatory wrote in a statementMonday (June 4). "Since these pyroclastic flows often move at speeds of greater than 80 kilometers (50 miles) per hour, they easily topple trees, homes, or anything else in their path." [Amazing Images of Volcanoes from Space]

The blast and resulting flows killed at least 62 people, according to media reports, and the death toll will almost certainly rise as rescue teams continue sifting through the wreckage and the rubble.

Satellites are too far removed to capture the full scope of this devastation, but they did spot some imprints of Sunday's eruption. For example, the Suomi National Polar-orbiting Partnership (Suomi NPP) satellite — a joint mission involving NASA, the National Oceanic and Atmospheric Administration and the U.S. Department of Defense — imaged Fuego's ash plume, which punched through overlying clouds.

Suomi NPP made this observation using its Visible Infrared Imaging Radiometer Suite. Another instrument aboard the satellite, the Ozone Mapping Profiler Suite, measured sulfur dioxide spewed by the volcano, allowing scientists to create a map of the gas in the middle troposphere, at an altitude of 5 miles (8 km), NASA Earth Observatory officials said.

Europe's Copernicus Sentinel-5P satellite has also been sniffing out sulfur dioxide in Fuego's plume, as an image taken on Sunday shows.

Fuego's latest eruption comes after an outburst by the Kilauea volcano, on Hawaii's Big Island. Kilauea has been erupting for 35 years, but its activity began surging in early May. The Kilauea outburst has caused no known fatalities to date.