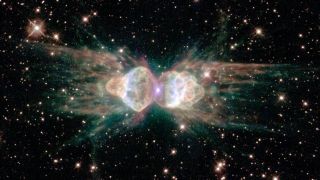 The Ant Nebula releases a rare type of laser emission, suggesting that the nebula's core houses two stars rather than one.
(Image: © NASA/ESA/Hubble Heritage Team (STScL/AURA))

Unusual laser emissions beaming from the Ant Nebula suggest that it is home to a hidden double-star system and that one of the companion stars is nearing the end of its life.

When stars similar to our sun start to die, they become dense white dwarf stars and then expel their outer layers to form an interstellar cloud of gas and dust known as a planetary nebula. Any lingering gas close to the center would soon fall back onto the star, leaving the surrounding area empty. However, that is not what has been observed around the Ant Nebula, according to a statement from the European Space Agency (ESA).

Using ESA's Herschel Space Observatory, astronomers observed a rare type of laser emission from the Ant Nebula, also known as Menzel 3, located between 3,000 and 6,000 light-years from Earth. Such emissions require very dense gas close to the star, according to the statement. [50 Fabulous Deep-Space Nebula Photos]

"When we observe Menzel 3, we see an amazingly intricate structure made up of ionized gas, but we cannot see the object in its center producing this pattern," Isabel Aleman, lead author of a new study detailing the observations and a researcher at the University of Sao Paulo, in Brazil, and the Leiden Observatory, in the Netherlands, said in the statement. "Thanks to the sensitivity and wide wavelength range of the Herschel observatory, we detected a very rare type of emission called hydrogen recombination line laser emission, which provided a way to reveal the nebula's structure and physical conditions."