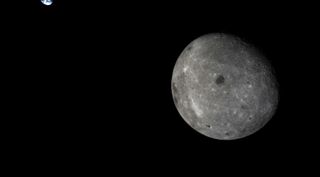 The far side of the Moon and distant Earth, imaged by the Chang'e-5 T1 mission service module in 2014
(Image: © China Academy of Sciences)

Helsinki, FINLAND — China is set to launch a relay satellite to the second Earth-moon Lagrange point May 21, in a necessary precursor to the planned Chang'e 4 soft-landing on the lunar far side late in the year.

Chang'e 4 is the backup to the Chang'e 3 mission, which put a lander and rover on Mare Imbrium in late 2013. Following that success, the lunar craft have been repurposed for a pioneering landing on the moon's far side.

The lunar far side does not face the Earth, as the moon's orbital period matches its rotational period, thus requiring a relay satellite to facilitate communications. [China's Moon Missions Explained (Infographic)]

Launch of the satellite will take place at the Xichang Satellite Launch Center in the southwest of the country via a Long March 4C rocket, with the three-day launch window opening on May 21.

The relay satellite, recently named Queqiao — or Magpie Bridge, taken from a Chinese folktale that sees two lovers reunited once a year when a flock of magpies forms a bridge across the Milky Way — will orbit around the Lagrange point around 40,400 miles (65,000 kilometers) beyond the moon, so as to be visible to both ground stations on the Earth and the lander and rover on the lunar far side at all times.

Its main function will be to relay telecommands from the ground to the Chang'e 4 lunar spacecraft and transmit data and telemetry back to Earth via S-band, while using x-band to communicate with the lander and rover.

Should launch and commissioning of the relay satellite proceed as planned, the lander and rover will be launched by a Long March 3B from Xichang around six months later, in November or December.

Ian Crawford, professor of planetary science and astrobiology at Birkbeck, University of London, told SpaceNews the mission would be a "tremendous undertaking, as it would be the first time any spacecraft has successfully landed on the far side of the moon."

The landing is currently expected to target the Von Kármán crater within the South Pole-Aitken Basin, though a decision on the final site has not been announced by Chinese scientists.

The South Pole-Aitken Basin is, Crawford notes, a high priority scientific objective for exploration, potentially offering unique insights into the formation of the moon and history of the solar system.

The relay satellite, developed by the China Academy of Space Technology, will also carry the Netherlands-China Low-Frequency Explorer (NCLE), a low-frequency, space-based astronomy pathfinder experiment that will attempt to detect radio signals from the cosmic dark ages, before emission of light by the first stars in the universe.

Radio astronomy below around 30 MHz can only be carried out effectively outside of the Earth's ionosphere, and the satellite's position beyond the moon will allow it to take a unique look at this largely unexplored region of the electromagnetic spectrum, with minimal interference from Earth.

Professor Heino Falcke of Radboud University in the Netherlands, part of the NCLE team, told SpaceNews he doesn't want to set the bar too high for this attempt at picking up a cosmic dark ages signal. It could put an upper limit on the signal and is expected to be instructive for future low-frequency astronomy space missions. [The Universe: Big Bang to Now in 10 Easy Steps]

Along with its main objective, NCLE will also aim to characterize the galactic background and measure emissions from the sun and Jupiter, as well as measure the wake of the solar wind behind the moon.

Falcke says getting the instrument ready in time and integrated on the spacecraft was a "ride on the edge," with the call for international participation in Chang'e 4 only coming in 2015, and the Dutch team needing to develop their own antenna from scratch, due to ITAR regulations limiting exports to China.

The antenna is only expected to be deployed for use sometime in 2019, after the main Chang'e 4 mission, with the rover having a designed operation time of three months on the lunar surface.

The May launch will also carry two microsatellites named Longjiang-1 and -2, meaning "Dragon River," which were developed by the Harbin Institute of Technology (HIT) in the north-eastern province of Heilongjiang.

The pair will carry synchronized receivers for low-frequency astronomy and very long baseline interferometry experiments and operate in a highly elliptical lunar orbit. They will also be available for amateur radio tests, with one of the two 45-kilogram, 50x50x40-centimeter satellites also set to carry a micro optical camera developed by the King Abdulaziz City for Science and Technology (KACST) of Saudi Arabia.

The launch this month will be China's fifth lunar mission, following two orbiters, Chang'e 1 and Chang'e 2 in 2007 and 2010, respectively; Chang'e 3 in 2013; and the 2014 Chang'e 5 T1 probe, which flew a capsule around the moon and back to test re-entry for a planned lunar sample return. The full sample-return mission, Chang'e 5, is expected to take place in 2019.