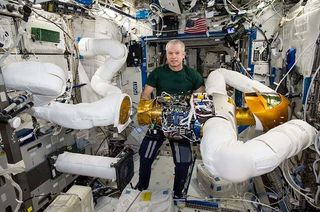 Robonaut 2, seen with astronaut Steve Swanson, was upgraded to receive legs in 2014. The work exposed a problem with Robonaut's wiring, requiring it return to Earth for repairs in May 2018.
(Image: © NASA)

The world's first humanoid robot in space splashed down on Earth on Saturday (May 5), 57 years to the day after the first American astronaut did the same.

Robonaut 2, or R2 for short, returned to the planet aboard SpaceX's fourteenth Dragon cargo spacecraft to land from the International Space Station. Unlike Alan Shepard, who came away from his 1961 Mercury spaceflight unscathed, R2 came home damaged and partially disassembled.

Launched in 2011 in an effort to create a robotics research platform on the space station, the two-handed, dexterous Robonaut 2 ceased working three years later as it was just gaining its "space legs" — literally, a new pair of climbing manipulators. It was packed up and brought back to Earth after the upgrades needed to support its new appendages began causing significant problems. [NASA's Humanoid Robonaut 2 Waltz Both Elegant and Creepy]

"Robonaut is being returned to repair damage caused by a missing ground path from the computer chassis that was discovered while it was on orbit," Julia Badger, Robonaut's project manager at Johnson Space Center in Houston, told collectSPACE.com in an email.

From the first time that it was powered aboard the station on Aug. 22, 2011 through a series of two years of periodic tests, R2 showed that a humanoid robot could potentially assist a human space crew, freeing astronauts from having to perform basic maintenance activities.

Working with a task board, R2 demonstrated it was able to press buttons, flip switches and turn knobs, as well handle crew tools, including an RFID inventory scanner and an air flow meter. A space station crew member was also able to teleoperate R2, commanding it to catch an object floating inside the orbiting laboratory.

The next step was to provide the torso-only R2 the ability to go mobile.

In April 2014, a pair of lower limbs for R2 were launched to the station. But the legs were not plug-and-play. For R2 to be able to walk, it first needed new computers and wiring.

NASA did not know it at the time, but the new components were about to short circuit R2.

"Robonaut exhibited symptoms when it was upgraded with legs — this upgrade included several new components in the computer chassis, essentially increasing the [electrical] current load to something that would trigger a failure in the power supply intermittently," said Badger.

There was a missing ground path within R2's wiring, which caused the system to overload and shut off unexpectedly. Worse still, because the issue was not quickly recognized, every attempt at diagnosing the problem resulted in more electrical shorts.

"As we continued to debug the problem more damage was inflicted," Badger wrote. "The problem became more clear as the symptoms became less intermittent."Repair and re-launch?

In February of this year, just three days after the seventh anniversary of its launch, R2 was packed up in preparation for its return to Earth.

"The backpack that houses power conditioning equipment had to be removed and packed separately," said Badger, "but otherwise [R2] is completely assembled, folded up in a bag."

On Saturday, R2 splashed down off the coast of California together with science experiment results and other station hardware. Later this week, R2 will be delivered to Johnson Space Center, where it was developed, to be brought back to working order.

"R2 will undergo repairs, checkouts and small upgrades that have been applied to the other Robonauts during R2's leave of absence from Earth. We hope to turnaround the robot quickly, since it still has a lot of important work [to do] pushing technology advances on board the International Space Station," Badger told collectSPACE.com.

The expectation, she said, is for R2 to return to the space station, though how and when that will happen is still to be determined.

Even though R2's mobility upgrade did not go fully to plan, the results added to the lessons Robonaut 2 was designed to provide.

"Its mission was a success in that we learned a lot from both the things that went well and the things that didn't go as planned. We ran many tests on Robonaut that shaped our technology development efforts over the last five to six years," described Badger. "We successfully performed a major upgrade on an on-orbit robot and we learned about mechanical and electrical design issues for space robotics that we wouldn't have without this experience."

"Robonaut 2's first flight was a learning experience that will be invaluable as we step towards an internal robotics solution to maintenance and logistics for future exploration spacecraft," she said.