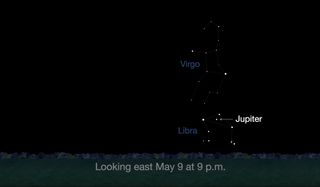 This NASA sky map shows the location of Jupiter on May 9, 2018, at 9 p.m. local time. Jupiter will reach opposition, its closest point to Earth of the year, on May 8.
(Image: © NASA/JPL-Caltech)

Skywatchers will see Jupiter at its brightest Tuesday (May 8), when the planet is exactly opposite to the sun in our sky. Here's how to catch a glimpse of the solar system's largest planet.

Jupiter will rise in the eastern sky a few hours after sunset. Then, the planet will be visible all night, shining so brightly that, weather permitting, you will be able to see it easily with the naked eye. If you have a small telescope, you should be able to see cloud bands in the gas giant's atmosphere, as well as its four largest moons (Ganymede, Callisto, Europa and Io). The moons will appear as tiny, bright dots that change position every few hours or days. [The Brightest Planets in May's Sky Explained]

The technical word for Jupiter's position in the sky is "opposition," which happens when two astronomical objects are on opposite sides of the sky as seen from Earth. We generally say that a planet is "in opposition" when it is in opposition to the sun — in other words, when Jupiter rises shortly after the sun sets, or vice versa.

Jupiter's closest approach to Earth will be on May 10, just a couple of days after opposition. That's because the orbits of Earth and Jupiter are not perfect circles. "If our planets' orbits were perfect circles, then yes, we'd be closest together on the date Earth passes between Jupiter and the sun. But Earth's orbit, and Jupiter's orbit, are elliptical, like circles someone sat down on," according to EarthSky.

How to see Jupiter

According to timeanddate.com, observers in New York City will see the sun set at 7:59 p.m. EDT Tuesday. Jupiter will rise just a few minutes earlier, at 7:48 p.m. But the planet won't be visible immediately because the twilight sky in the east is so bright.

It's best to wait at least a couple of hours after sunset to look for Jupiter. The sky will be darker, and Jupiter will rise above the horizon, where Earth's air is at its thickest. Jupiter will glide across the sky all night and set at 5:58 a.m. EDT Wednesday (May 9), around sunrise in New York City.

You can check timeanddate.com or use skywatching software and apps like SkySafari to find the best time to see Jupiter for your location.

Editor's note: If you snap a great photo of Jupiter at opposition, let us know! You can share photos for a potential story or gallery by sending images to spacephotos@space.com.

Other planets to see

While you're outside planet hunting, try to spot Venus, another target that is so bright you can see it with the naked eye.

Go outside around sunset, and look low to the west. Venus will appear as a bright, white light in the western sky.

On May 17, Venus will appear beside the setting moon, and on May 18, Venus will still be near the moon. If you look down and to the left of Venus, you might be able to see the ruddy star Betelgeuse (a red supergiant star) that is very close to the horizon.

You can also spot two other planets in the sky, if you know where to look. In the next week, go out just before dawn, and look for the constellation Sagittarius, in the south. (It looks a bit like a teapot.) If you look just above the tip of the teapot, you'll be able to see Saturn, the giant ringed planet in our solar system, according to Sky & Telescope. To the left of Saturn and Sagittarius, you probably will see a bright, red object. That's Mars.

Jupiter is the largest planet in our solar system, and scientists are very interested in learning more about it. By examining Jupiter, they can predict the weather and composition of large extrasolar planets. Jupiter is host to a large storm, called the Great Red Spot, that has been shrinking for unknown reasons and could disappear in 20 years.

The planet also has a strong magnetic field. A NASA mission called Juno is examining Jupiter's atmosphere, magnetic field and composition right now. In the 2020s and 2030s, both NASA and the European Space Agency (ESA) plan missions to examine some of Jupiter's icy moons that could host microbial life. NASA's mission is called Europa Clipper, and ESA's is called JUICE (Jupiter Icy Moons Explorer).