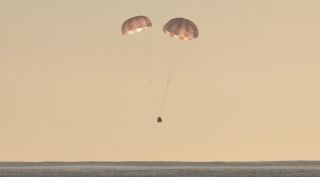 A SpaceX Dragon capsule descends to a splashdown in the Pacific Ocean. The company is seeking permission to carry out such landings in the Gulf of Mexico as a backup option to the Pacific or Atlantic.
(Image: © SpaceX)

WASHINGTON — SpaceX is seeking permission to perform splashdowns of its Dragon spacecraft in the Gulf of Mexico, part of a shift in spacecraft recovery operations from the Pacific Ocean.

In a draft environmental assessment prepared by the Federal Aviation Administration, SpaceX proposes to conduct up to six Dragon landings a year in waters off the Gulf coast, between Texas and Florida. The assessment, completed in March, was published in the Federal Register April 5.

According to the report, the Gulf of Mexico would serve as a contingency landing site for both cargo and crewed Dragon missions should the primary landing zone be unavailable. SpaceX currently lands Dragon spacecraft in the Pacific Ocean and has approval to carry out future splashdowns in the Atlantic.

The need for the backup landing zone, the report states, is to ensure the future crewed Dragon spacecraft can return to Earth should there be a problem with the primary landing site. "With the introduction of the [commercial crew program], the ability to return crew to Earth in a safe and timely manner is extremely important, particularly in cases where human life or health may be in jeopardy," the report states, adding that the proposal "ensures that a secondary splashdown option is available to missions planned to splashdown in either the Pacific or Atlantic Oceans."

The landing site is in waters between 28 and 260 kilometers offshore from the Gulf coast, in waters that are within the U.S. economic exclusion zone, but doesn't specify preferred regions within that area. The site would support missions launched from Florida as well as the launch site SpaceX is developing near Brownsville, Texas.

For those splashdowns, the planned recovery fleet includes one ship, nearly 50 meters long, and several smaller rigid-hulled inflatable boats. The boats would perform initial assessments of the Dragon capsule after splashdown and wait for the arrival of the ship to hoist the capsule out the water and onto its deck. One or two helicopters would ferry crews and cargo from the ship to shore.

All SpaceX Dragon splashdowns to date have been in the Pacific, in waters off the coast of Baja California several hundred kilometers southwest of the Port of Los Angeles. With upcoming crew missions, SpaceX plans to shift the primary landing site to waters just off the coast from Cape Canaveral, Florida.

According to an October 2017 document included in the draft environmental assessment, SpaceX plans to carry out three landings a year of its existing Dragon spacecraft in the current Pacific Ocean zone from 2018 through 2020, as well as three landings a year of its Dragon v2, or Crew Dragon, in the Atlantic zone. Starting in 2021 SpaceX would shift to flying Dragon v2 spacecraft exclusively, for crew and cargo, with all missions splashing down in the Atlantic. In those scenarios the Gulf of Mexico would serve as a backup landing site.

That same report also discusses efforts by SpaceX to recover payload fairings from other Falcon 9 launches. That recovery system, as described in the October 2017 document, includes a nitrogen cold gas thruster system to orient the payload fairing halves for re-entry after separation from the rocket, as well as a drogue parachute and a parafoil.

The drogue is deployed at an altitude of about 15,000 meters to slow down the fairing after reentry and release the parafoil. SpaceX was studying two different types of drogue and parafoil systems for fairing recovery, one with nearly double the deployed area as the other.

The report states that the fairing would splashdown and then be recovered from the water by a "salvage ship" in the landing zone. However, SpaceX has been studying how to steer the fairing to a landing on a large net on a ship itself. One such ship, named Mr. Steven, is equipped with four large arms on which a large net is attached to catch the fairing before it hits the ocean.

Those recovery efforts have not succeeded yet. On a March 30 Falcon 9 launch from Vandenberg Air Force Base in California, SpaceX attempted to catch a payload fairing using Mr. Steven  but failed to do so. "GPS guided parafoil twisted, so fairing impacted water at high speed," SpaceX Chief Executive Elon Musk tweeted that day. "Air wake from fairing messing [with] parafoil steering. Doing helo drop tests in next few weeks to solve."

Musk's statement led people to initially conclude that the fairing broke up or was seriously damaged upon splashdown. Two days later, though, he tweeted a photo of the fairing floating in the ocean, without any sign of significant damage. "[F]orgot to mention it actually landed fine, just not on Mr Steven," he said.