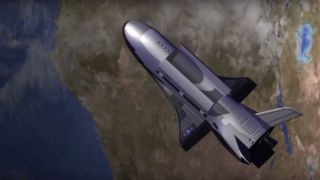 Artist's illustration of the U.S. Air Force's X-37B space plane in Earth orbit. One of the vehicles just soared past 200 days in its latest mission, in which it is carrying out classified duties.
(Image: © Boeing)

The U.S. Air Force's X-37B space plane has winged past 200 days in orbit on its latest clandestine mission.

According to Air Force officials, one payload flying on OTV-5 is the Advanced Structurally Embedded Thermal Spreader, or ASETS-11, of the U.S. Air Force Research Laboratory (AFRL). This cargo is testing experimental electronics and oscillating heat pipes for long durations in the space environment. [The X-37B Space Plane: 6 Surprising Facts]

"The X-37B has been and remains a technology demonstrator," said Joan Johnson-Freese, a professor in the National Security Affairs Department at the Naval War College in Newport, Rhode Island.

"Given that most space technology is dual-use, with the ever-increasing sway toward warfare in space, it's likely that the more militaristic uses of the space plane will be pursued more vigorously, and likely openly given the [presidential] administration's proclivity toward chest thumping," she told Space.com, expressing her personal view.

How long the unpiloted, reusable craft will stay aloft is not known, but experts have said it's likely to land at KSC's Shuttle Landing Facility, as the OTV-4 mission did back on May 7, 2017. That was a first for the program, as all prior missions had ended with a tarmac touchdown at Vandenberg Air Force Base in California.

Each X-37B mission has set a new flight-duration record for the program.

And OTV-4 conducted on-orbit experiments for 718 days during its mission, extending the total number of days spent in space for the OTV program to 2,085 days.

The space drone has a payload bay about the size of a pickup-truck bed, which can be outfitted with a robotic arm. X-37B has a launch weight of 11,000 lbs. (4,990 kilograms) and is powered on orbit by gallium-arsenide solar cells with lithium-ion batteries.

The classified X-37B program "fleet" consists of two known reusable vehicles, both of which were built by Boeing. Looking like a miniature version of NASA's now-retired space shuttle orbiter, the military space plane is 29 feet (8.8 meters) long and 9.6 feet (2.9 m) tall, with a wingspan of nearly 15 feet (4.6 m).

"There were indications that OTV-5 went to a significantly higher-inclination orbit than previous OTV missions," he told Space.com. "There was too little information to narrowly constrain a search."

Molczan said he assisted in one fruitless search, but it was of the roughly 44-degree-inclination orbit implied by the OTV-5 launch's "Notice to Airmen," the routine report put out to warn any aircraft pilots who may be near the flight path.

"The final orbit may be more like 60 degrees," he said. "If an object is not found within days or a few weeks of launch, then the trail goes cold and discovery depends on a chance sighting."