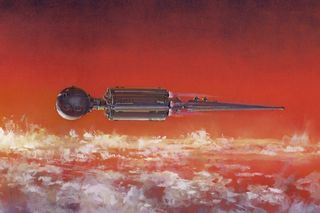 It was 50 years ago yesterday (April 2) that a sentient computer called HAL wreaked havoc on a crewed spaceship on its way to Jupiter. The fictional story, based on an Arthur C. Clarke novel, is called "2001: A Space Odyssey," and it was one of the seminal movies of the early Space Age.

When "2001" was released, the United States was in the middle of an epic race to land humans on the moon — a feat the nation achieved only a year later, on July 20, 1969. But Jupiter remained an object only visible through telescopes. The first space mission to Jupiter — a robotic one, of course — was Pioneer 10, which flew by the planet in 1973.

Several robotic spacecraft flew by Jupiter after that, and two stuck around the planet for a while. The first was NASA's Galileo mission, which orbited the gas giant between 1995 and 2003. Today, Jupiter science is performed by NASA's Juno spacecraft, which arrived in orbit in 2016. [Dangling on a Wire: A Tale from the Making of '2001']

But what about humans? Why aren't we out there yet?

Besides space funding and priorities — NASA is occupied with the International Space Station (ISS) right now and is tasked with returning astronauts to the moon next, and then on to Mars — there's a big human health issue: Jupiter's nasty radiation environment. Juno is surviving thanks to intense shielding, but even that will last only so long.

NASA's radiation guidelines currently allow astronauts to accrue dosages that would increase their lifetime cancer risk by up to 3 percent. Past measurements from NASA's Curiosity rover suggest that an 860-day crewed Mars mission — consisting of a 180-day outbound cruise, a 500-day Red Planet stay and a 180-day return trip — would expose astronauts to a total of 1.01 sieverts of radiation, which is associated with a 5-percent increase in cancer risk.

But Jupiter's radiation environment may be worse than that of Mars. At Jupiter, the best-case scenario for avoiding dangerous radiation exposure might be to work in the ice of Jupiter's ocean-harboring moon Europa; a potential probe there would receive a radiation dose of 0.3 sieverts a year, according to a 2016 study. (The hypothetical Mars mission discussed above would deliver a dose of 0.43 sieverts per year.) But the environment would be much less friendly on Europa's surface, or in Jupiter's intense radiation belts.

People exposed to high levels of radiation can experience acute symptoms such as nausea, disorientation and hair loss, and even death, according to the Mayo Clinic. But adding shielding to a spacecraft to prevent radiation exposure would make the spacecraft extremely heavy, which adds launch mass and complications. It might take more advanced technology to construct the right shielding for a spacecraft, since current solutions involve using large quantities of water, for example.

Juno principal investigator Scott Bolton, of the Southwest Research Institute in Texas, said it was sometime in the late 1960s or 1970s that scientists began to learn how dangerous the radiation belts are at Jupiter. "Back in '68, we probably knew there were radio emissions and there was a magnetic field, but I don't think anyone had related it yet to a really severe environment," he told Space.com.

Even in the 1980s, when the Galileo spacecraft was being designed, engineers underestimated just how intense the radiation environment was, said Amy Simon, a senior scientist for planetary atmospheres at NASA's Goddard Space Flight Center in Greenbelt, Maryland.

"It [the environment] was pretty intense," said Simon, who has published papers reviewing the Galileo data. "We found, with the Galileo mission, that every time we got close to [Jupiter's moon] Europa or Jupiter, the spacecraft kept 'spacing' [i.e., struggling to do its work]. It wasn't ready for that environment. It changed our view of how we build our spacecraft and our electronics."

Radiation is only one challenge colonists would face; they would also have to bring along their own water, figure out where to put waste and face long communication delays when trying to talk to people back on Earth. Some techniques that could be helpful, such as processing urine for astronauts to drink, are already being tested on the ISS. Communication delays may also be tested on the orbiting complex soon; astronauts have already tried out techniques to mitigate these problems during NASA Extreme Environment Mission Operations sorties underwater.

Bolton was a childhood fan of Clarke and remembers watching the movie "2001." Before becoming a space physicist, Bolton was an avid science-fiction reader in high school; he was part of the science-fiction book club there. "Clarke was one of my favorite authors; he was very accurate and very brilliant, imaginative. He thought about the physics, and I really connected to it," Bolton recalled.

Bolton met Clarke, who died in 2008 at age 90, several times through space and NASA events. One of Bolton's most memorable encounters was getting Clarke to sign a copy of the book "2001" in the actual year 2001. (Clarke, naturally, added the year to his signature.)

Bolton called the encounter a "funny coincidence," because nobody knew back then that Bolton would lead a mission to Jupiter — and here Clarke was, signing a book about a mission to Jupiter. But Bolton does remember telling Clarke how big of a fan he was. "I told him he had influenced my life and so forth," Bolton said.

Simon also remembers watching the movie as a child, although it was a few years after the film's release. "I didn't understand it at all," she said, but the movie's complicated plot was compelling enough that she watched it several times — and read the book.

Jupiter has such a complex environment that space scientists are still learning much about the planet today. Simon looks at Jupiter once a year through the Hubble Space Telescope's Outer Planets Atmospheres Legacy (OPAL) program, which collects observations on the solar system's outer planets annually. (Observations of Saturn, however, will only start this year, since the Cassini spacecraft was working there until 2017.)

"I think what we've learned about the Jupiter system is, it's so dynamic," Simon said. A dramatic example of that took place in 1992 to 1994, when Comet Shoemaker-Levy 9 broke up around Jupiter and its pieces slammed into the gas giant's atmosphere. "It made us realize the solar system is still changing, and it's not all set and static," she said.

More observations of Jupiter revealed changes in its atmosphere, Simon said. The famous Great Red Spot storm is shrinking, changing color and may disappear relatively soon. Clouds move, and the famous bands of Jupiter shift. Scientists are still trying to understand Jupiter's weather, Simon added, but it's difficult because OPAL looks at Jupiter only once every Earth year. Because Jupiter's orbit is about 12 Earth years long, Simon compared the situation to trying to look at Earth only once a month and then making weather predictions based on that data.

Even Juno's short time at Jupiter has revealed many surprises, Bolton said. For one, the planet's atmosphere, including storms like the Great Red Spot, appears to go down extremely deep. Scientists have uncovered more information about Jupiter's auroras and polar cyclones. Even the interior structure looks different from what researchers expected.

"We thought there would be a small core, or no core of rocky material," Bolton said. "Now we found the [core] is huge and maybe partially dissolved."

And there are other missions planned to the Jupiter system in the 2020s. These missions will focus on another emerging line of research: icy moons. It was only after Voyager 1 and 2 flew by Jupiter in 1979 that researchers realized that the moon Europa likely had an ocean under its ice. Now, Jupiter moons Ganymede and Callisto are also believed to have oceans. In recent years, Hubble researchers even spotted spurts of possible water jetting from Europa.

The European Space Agency's JUpiter ICy moons Explorer (JUICE) mission is scheduled to launch in 2022 and arrive in 2029 to examine Ganymede, Callisto and Europa. NASA, meanwhile, is working on a Europa Clipper mission that is expected to launch sometime in the 2020s.